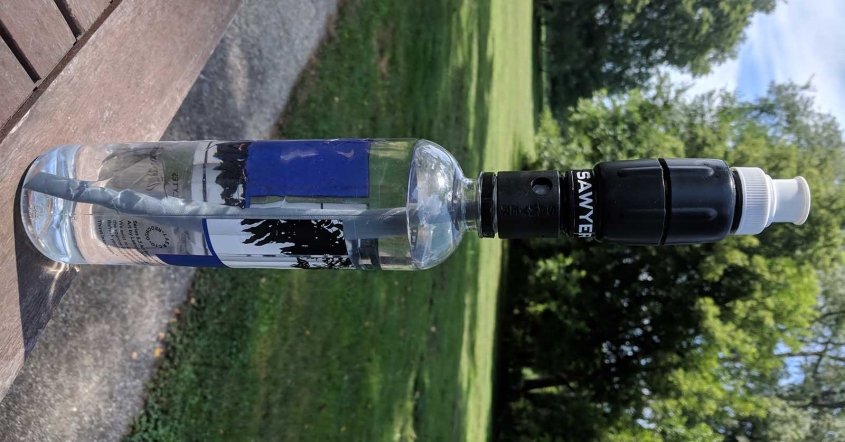 Sawyer introduced three items that should make the best water filter system on the market even better. The new mid-sized Sawyer Micro Squeeze Filter with the new squeeze pouch is 1/2 the weight of the full-sized Sawyer Squeeze filter with the old squeeze pouch. According to my scale (1.85 oz) the new Micro Squeeze Filter is even lighter than the 2.0 oz Sawyer Mini Filter.

And likely a game changer for Sawyer. They introduced a “Bottle Breather” that will make it easy peazy to drink from a filter mounted on a Smart Water bottle. Users of the ubiquitous Glaceau Smart Water bottle should be delighted! 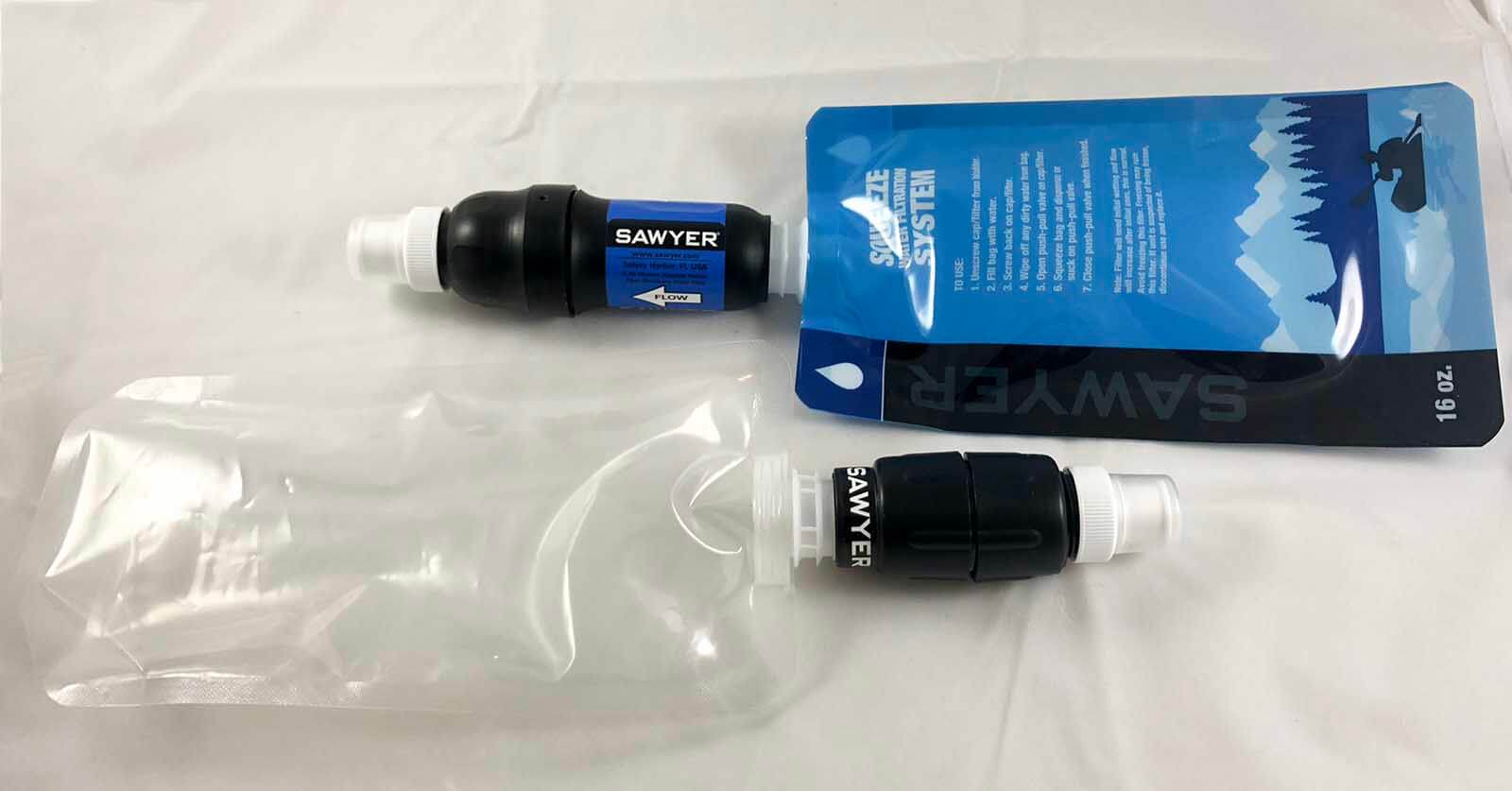 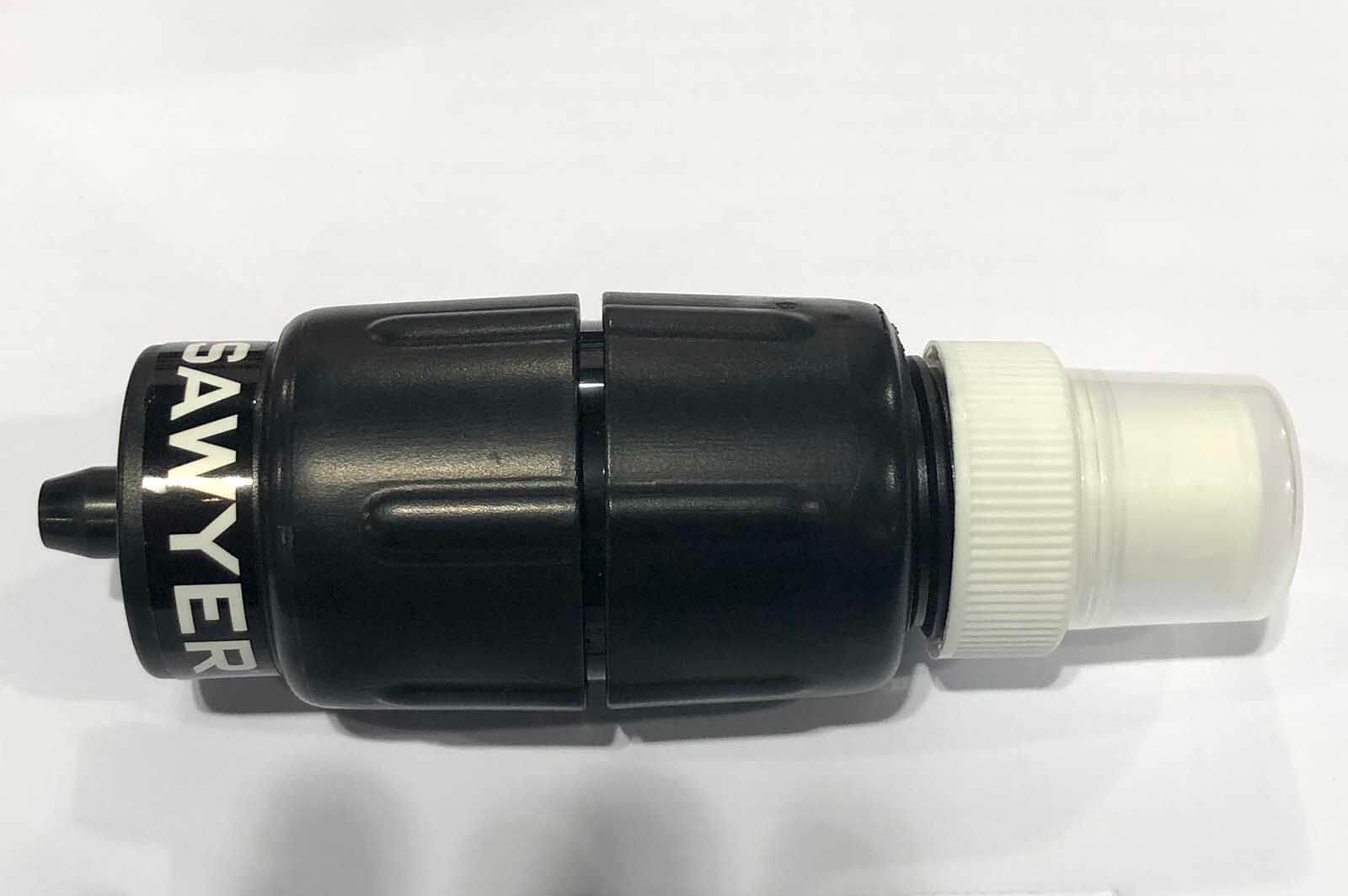 The new Sawyer Micro Squeeze Filter is 1/2 the weight of the larger, workhorse Squeeze Filter while retaining many of its more desirable features like a higher flow rate and less tendency to clog (vs. the Sawyer Mini Filter).

1. New Sawyer Micro Squeeze Filter 1.8 oz (52g) – This new filter hits the sweet spot between the very small Sawyer Mini Filter (lower flow rate & more prone to clogging) and the much larger, full-sized Squeeze (the Thru Hiker workhorse in the Sawyer line). Due to its larger diameter, the Micro Squeeze should have a higher flow rate than the Sawyer Mini Filter and be less prone to clogging. In addition, the new Micro Squeeze is far less cumbersome when attached to the end of a squeeze pouch or the ubiquitous Glaceau Smart Water bottle that many backpackers use. 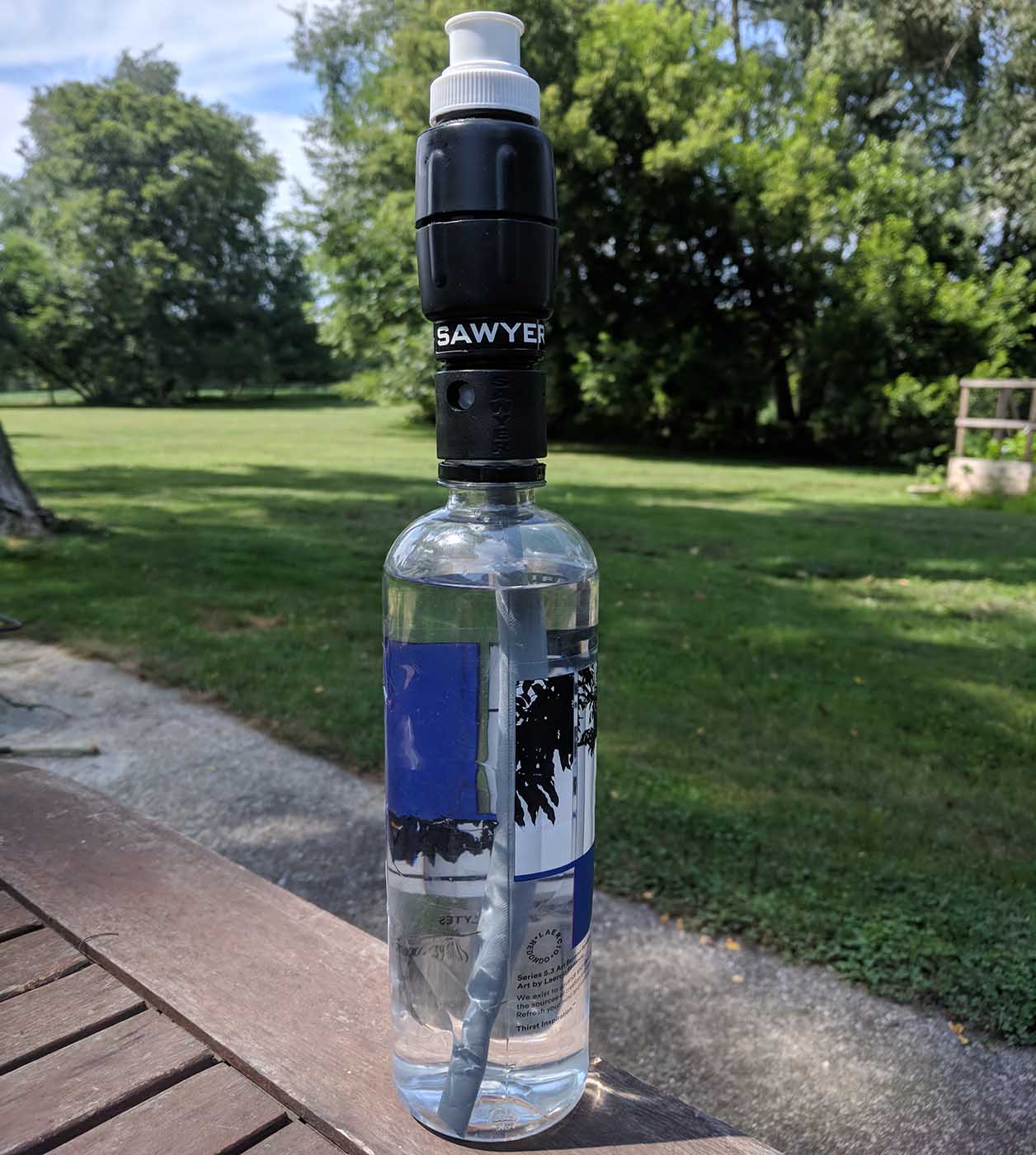 2. New Bottle Breather 0.5 oz (less tubing) – This will be game changer for Sawyer and great news for Smart Bottle users! When you are drinking from a rigid water bottle (e.g. Glaceau Smart Water bottle) the new Sawyer Bottle Breather allows air to enter the bottle as you drink. This keeps the sides of the bottle from collapsing in and means that you don’t have to take your mouth off of the filter to “burp” more air into the bottle to continue drinking. The Bottle Breather comes with cut-to-length tubing (a straw). Note: this system works best when used with the bottle in a vertical position. [I expect to get a post-Outdoor Retailer Show test version of this soon.] 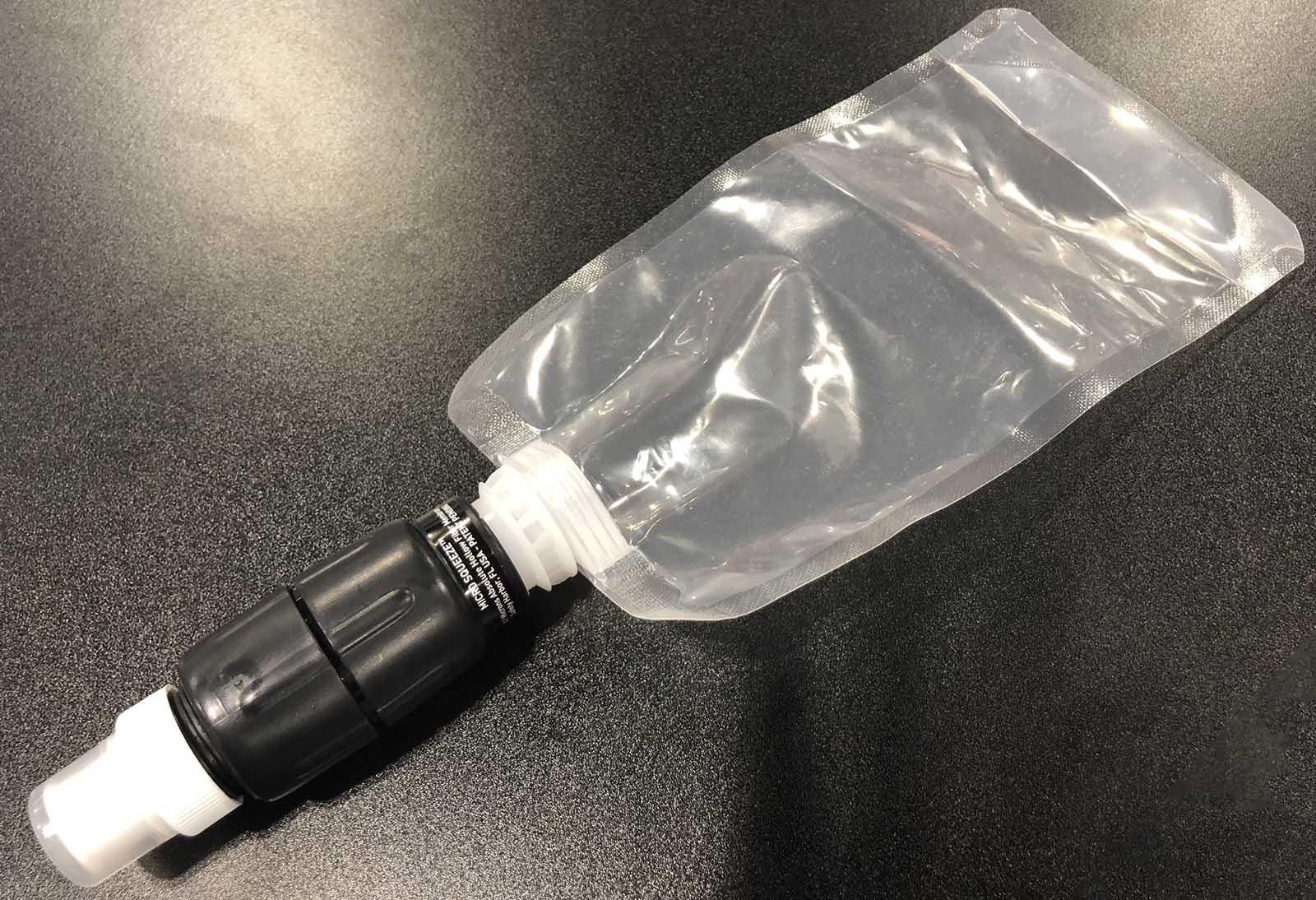 The new mid-sized Sawyer Micro Squeeze Filter with the new squeeze pouch is 1/2 the weight of the full-sized Sawyer Squeeze filter system.

3. New squeeze squeeze pouch 0.50 oz, 1 L size – Sawyer’s new squeeze pouch is 1/2 the weight of the old squeeze pouch, but just as strong. The pouch also has a new bottom gusset so the pouch fills easier and stands easier. The pouch uses a new proprietary polymer that Sawyer engineer John Smith declined to elaborate on. [Note: the pre-production pouch in this picture is clear. The new production pouches will be opaque (not clear), similar to current pouch design.]

I see the Micro with Bottle Breather as a game changer for fast, effective, hassle free water filtration for backpackers and hikers. This new system will easily fit in the side pocket of a backpack — quickly providing safe drinking water without the need for chemicals. In addition, a rigid water bottle is much easier to fill than the soft-sided squeeze pouches.

A lighter and lower cost alternate to the full-sized Squeeze Filter that has the full pop top bottle cap and higher flow rate (than Sawyer Mini Filter) will be appealing to hikers and backpackers that don’t beat the crap out of their gear for weeks or months on end. In addition, the new Micro Squeeze Filter is less bulky and cumbersome when mounted on the top of a Smart Water bottle or squeeze pouch. 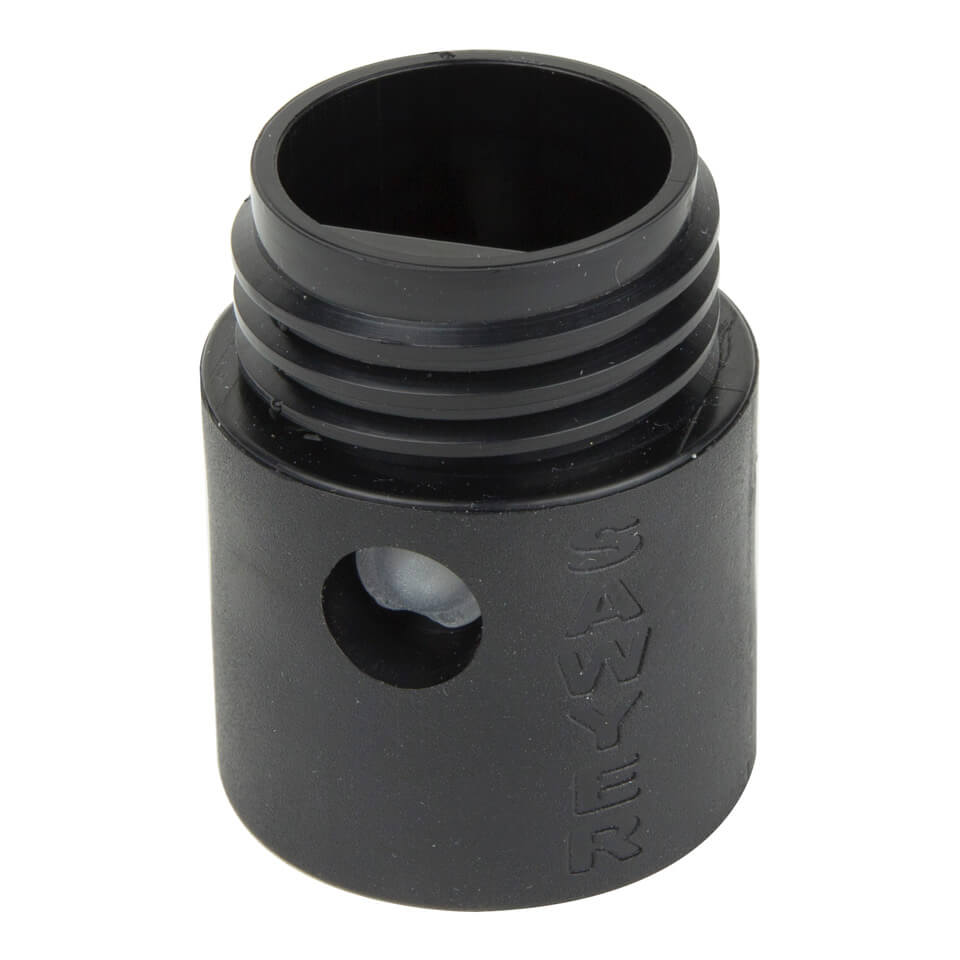 This post contains affilate links. If you make a purchase after clicking on the these links, a portion of the sale helps support this site at no additional cost to you. I do not receive compensation from the companies whose products are listed. For product reviews: unless otherwise noted, products are purchased with my own funds. I am never under an obligation to write a review about any product. Finally, this post expresses my own independent opinion.