Drink When Thirsty debunks the many myths about hydration and dehydration like “If you are thirsty, it’s already too late” and  “If your urine is yellow, you are dehydrated.” This article suggests that Drink When Thirsty is the best and healthiest strategy for hydration during exercise.

People may be drinking too much water…

With all the hype about the risks of dehydration, it is actually over hydration (hyponatremia) that may be more of a risk. People are now having serious health problems from over hydration for endurance races and even hiking in the Grand Canyon—sometimes resulting in death1,2,3. [Note: Since I first published this post it has been shared by numerous Emergency Medical Treatment and Search and Rescue organizations for this very reason.]

The simple, inexpensive Hydration and Purification System that Alison and use is shown above. When “drinking to thirst,” it has kept us well hydrated — even between distant water sources in the desert.

Drink When Thirsty – Myths and Facts about Hydration

This is what I learned from these experts…

Myth1 – If you are thirsty, it’s already too late
Correct – Drink When Thirsty

*Dr. Tamara Hew-Butler says the natural thirst mechanism has been working in animals and keeping them well-hydrated for at least 700 million years. See more from Dr. Hew on how the human thirst mechanism works.

Why do we continue to hear sayings like, “hydrate or die,” “if you are thirsty, it’s already too late,” and stating that “your athletic performance will drop if you don’t drink enough“?

Deborah Cohen, investigations editor for the BMJ [formerly British Medical Journal], wrote up her findings in the 2012 feature article, “The truth about sports drinks5“. This article implies that the sports drinks industry has dramatically increased sales of their products by:

Here are some excerpts from the article

“Sports drinks are increasingly regarded as an essential adjunct for anyone doing exercise, but the evidence for this view is lacking. Deborah Cohen investigates the links between the sports drinks industry [e.g. Powerade (Coca-Cola) and Gatoraide (PepsiCo)] and academia that have helped market the science of hydration.”

‘“The problem was industry wanted to sell more products so it had to say that thirst was not adequate,” Noakes [Professor Tim Noakes, Discovery health chair of exercise and sports science at Cape Town University] says.’

And finally it address the Big Question, “How much water should I drink/carry on a hike?” 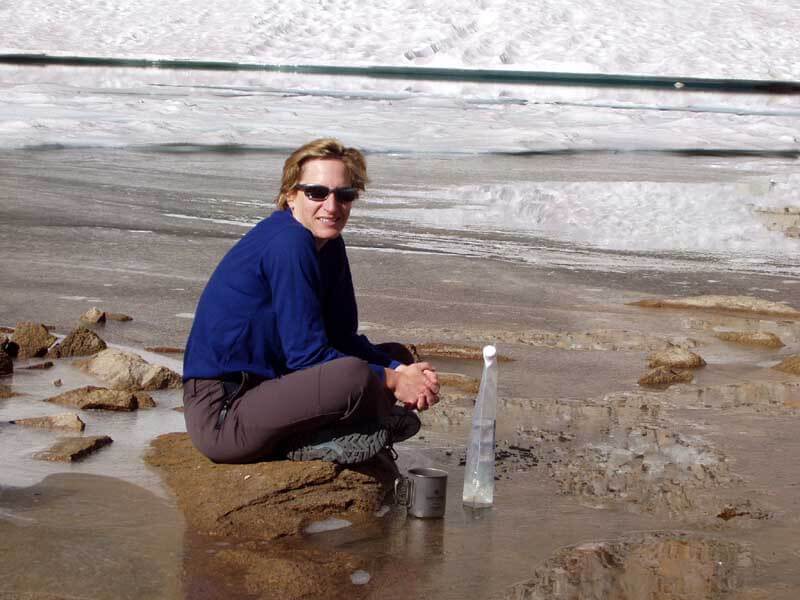 In cooler environments where water is plentiful you may not need to carry any water with you. Drink from the source, and you will likely not be thirsty when you reach your next water source.

Myth 5 – If your urine is yellow you are dehydrated
Correct-  Urine naturally turns yellow during exercise, even when adequately hydrated

How much water should I Drink/Carry on a hike?

This is the big challenge for backpackers, day-hikers or others that need to carry enough water between distant sources. Unlike Dr. Hoffman’s “There is no real danger of dehydration when people have access to water,” there is a possibility that if we don’t carry enough water between distant sources that we could run out of water and potentially become dehydrated. On the other hand, if we are hiking a long distance between water sources and and decide to carry 5 liters of water we are carrying an additional 11 pounds. This too has serious downsides.

The goal is homeostasis, or to drink the same amount of water as your body uses. But how do we estimate our personal water consumption needs for homeostasis in the field? There is likely no “right or exact” answer to this. Dr. Stuempfle and Dr. Tamara Hew-Butler agree that the following would be a reasonable strategy for individuals to estimate their personal water consumption in the field:

On a personal note, when following Drink When Thirsty I frequently do not carry any water with me in the field (Sierras, Appalachian Trail, etc.). When I drink (using aSawyer Squeeze Filter so I can drink directly at the source), I find that I am unlikely to be thirsty until I reach the next water source. My wife seems to run a bit thirster, and in addition to drinking at water sources, she usually carries somewhere between ½ to ¾ of a liter between sources. 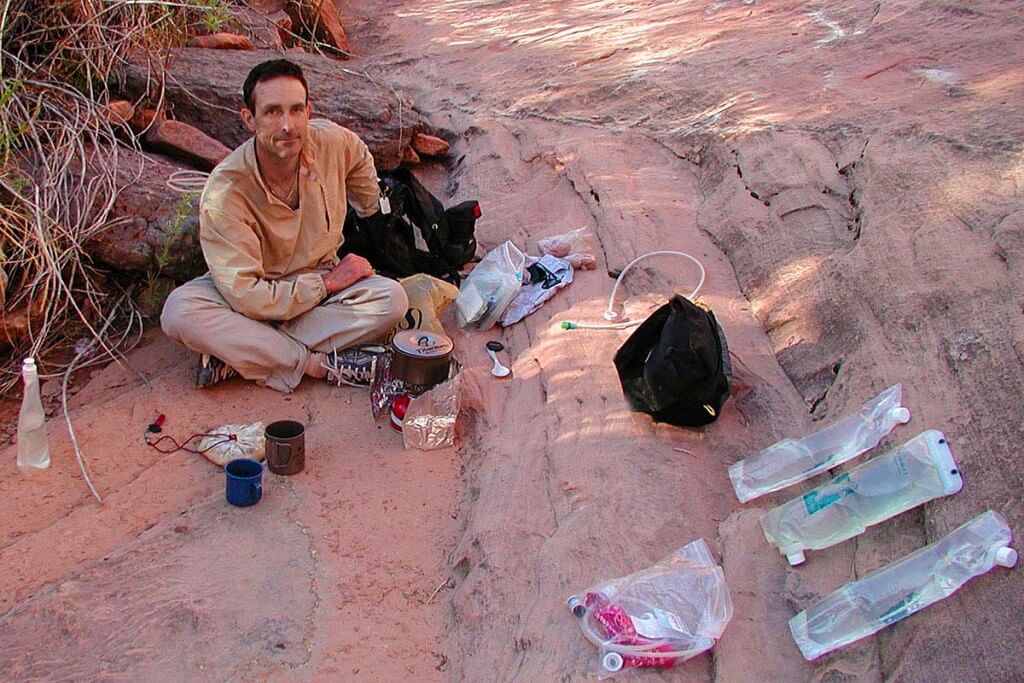 Although I rarely carry water with me, the desert is the exception. This picture is from a drought year in the Southern Utah desert. So an unusually dry time in an already hot and dry place. I have collected a lot of water: for dinner that evening, breakfast the next morning & to carry during the day to our next reliable water source.

The only place we carry large amounts of water between sources is in the Desert Southwest, like Canyoneering in Utah. But even then, following Drink When Thirsty, we carry less water than the “recommended” amounts in guide books and other “authoritative” sources. We pull long days in the desert and feel healthy and fine. But we have years of field experience and comfortably know our personal water needs in the desert.

How the natural thirst mechanism works

Dr Tamara Hew-Butler, who has studied the natural thirst mechanism in animals, says it’s been working to keep them well-hydrated for at least 700 million years. The human thirst mechanism functions in two ways: 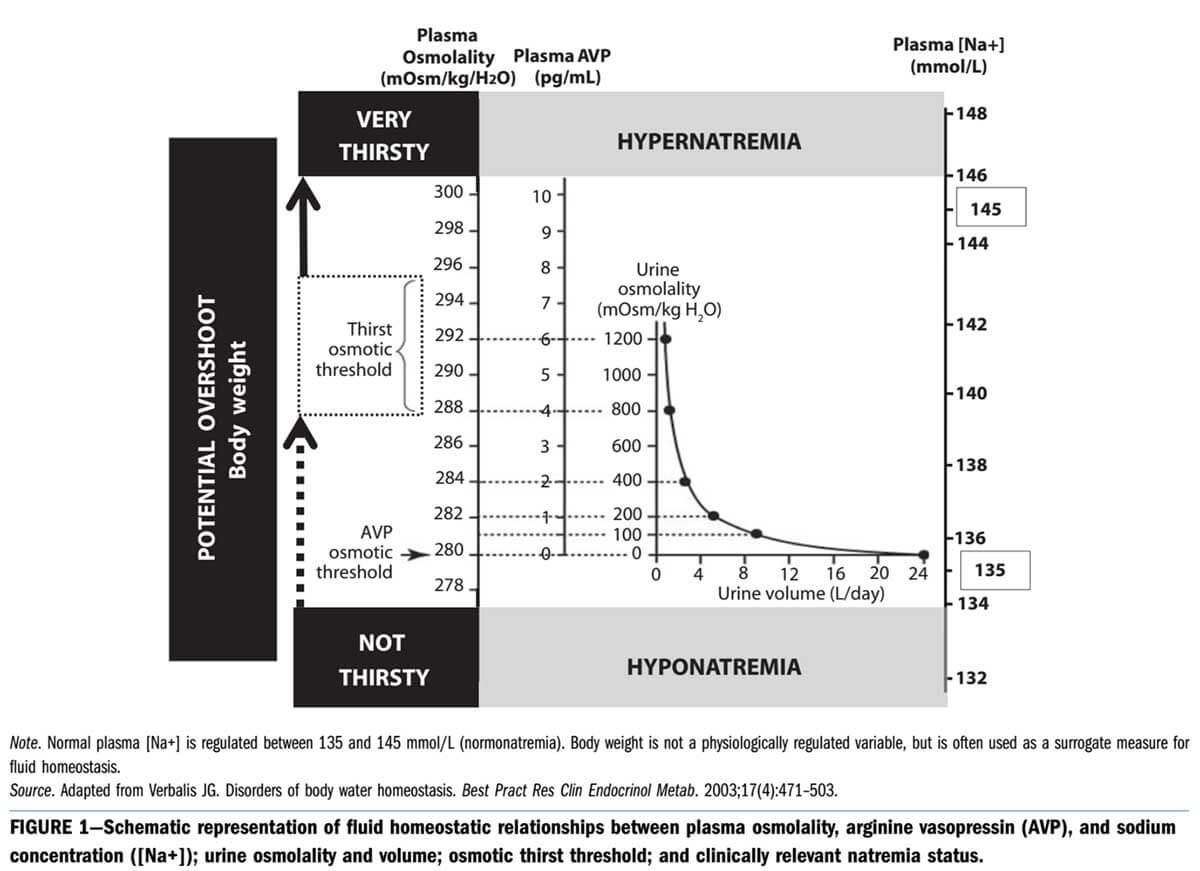 Drink When Thirsty, it’s been keeping hominoids well hydrated for millions of years.

Because these cookies are strictly necessary to deliver the website, refuseing them will have impact how our site functions. You always can block or delete cookies by changing your browser settings and force blocking all cookies on this website. But this will always prompt you to accept/refuse cookies when revisiting our site.