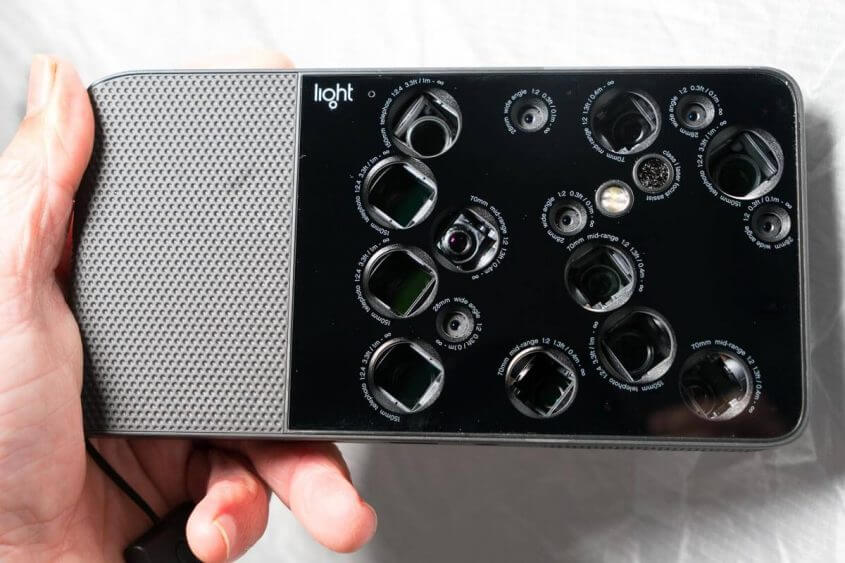 The Light L16 is one of the first “computational” cameras to hit the market. If it works it’s a game changer for high resolution and lightweight photography. Especially for hikers, backpackers, outdoor adventures, travelers or anybody that needs a light, pocketable camera that can produce a 52 megapixel image! And it has the promise of not needing to be traditionally focused. That is, you can determine where and how you want to focus a photo AFTER you take it. So how does the L16 hold up to the hype and high expectations? 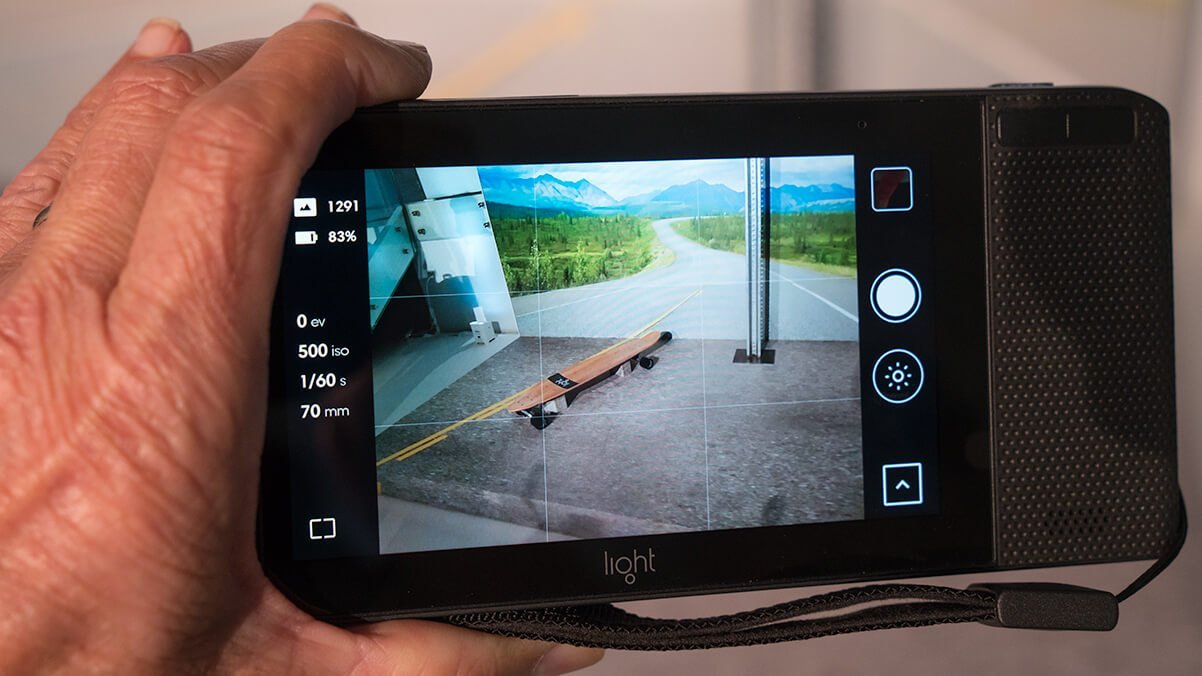 The Light L16 is much smaller and lighter than a conventional camera that takes a 50 megapixel photo. And it has a simple smartphone-like interface—not so surprising since it is an Android-based, touchscreen device. This make the L16 much faster and easier to learn and use than all the knobs, dials and nested menus on a conventional camera.

The Light L16 is a completely new approach to high-resolution photography. It’s a computational camera. That is, a camera that combines the information from many small, inexpensive “smartphone” lenses/sensors, arrayed across the front of the camera like spider eyes, into a single high resolution image.  This is done by sophisticated, “computational,” imaging software that merges the data from the camera’s 16 lenses of different focal lengths (wide angle, normal/portrait, and telephoto lenses) into a single photograph.

The Light L16 is exceptionally small and low-weight for a 52 megapixel zoom camera. It looks more like a slim smartphone vs. a bulky, awkwardly shaped, conventional camera with a big lens sticking out. It’s half the weight of the lightest comparable conventional cameras with similar resolution and lens zoom range (28mm to 150mm). 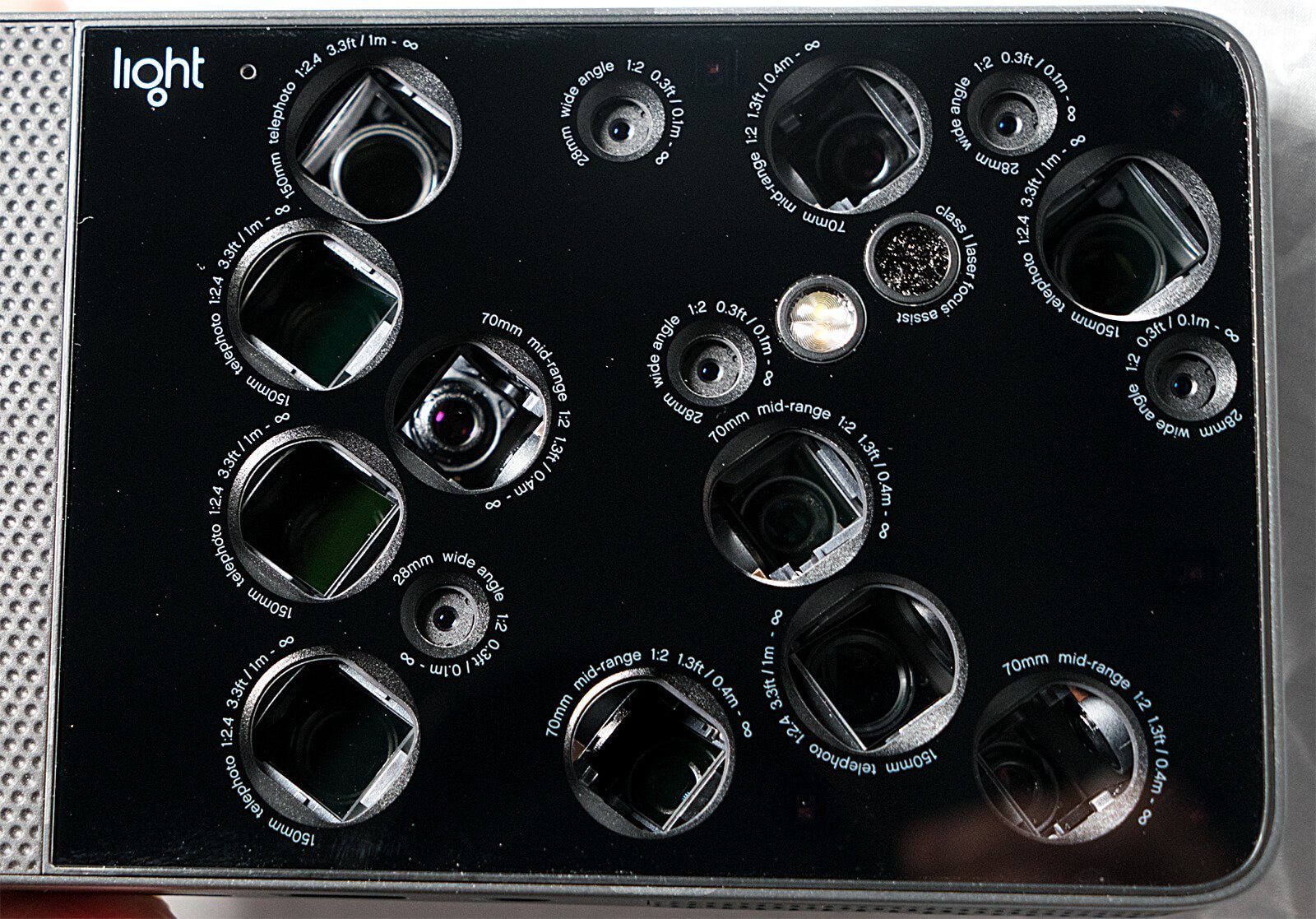 To take a  single high resolution image competing with much larger cameras, the Light L16 combines the information from many small, inexpensive “smartphone” lenses/sensors, arrayed across the front of the camera like spider eyes. Pictured is the L16’s lens array of (5) 28mm f/2.0, (5) 70mm f/2.0, and (6) 150mm f/2.4 lenses for a total of 16 lenses. The white circle slightly off-center is the camera’s LED flash. [click on image to enlarge]

Hands on First Look at the Light L16 Computational Camera

Last week I got a few hours of hands on use with the new Light L16 camera. Here’s my take after using the camera, looking at it’s post processing software and talking with a some of Light’s technical staff. Note: This was a short time. Some of it in a controlled environment, although I did get some time to wander around New York City at night with the camera and do some street shooting. Fun! 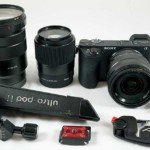 Note: For comparison, the following PROS & CONS loosely use a traditional crop format camera like the 24 MP Sony a6500 with a Sony 18-105 f/4 lens (see my lightweight hiking, backpacking and travel photo kit 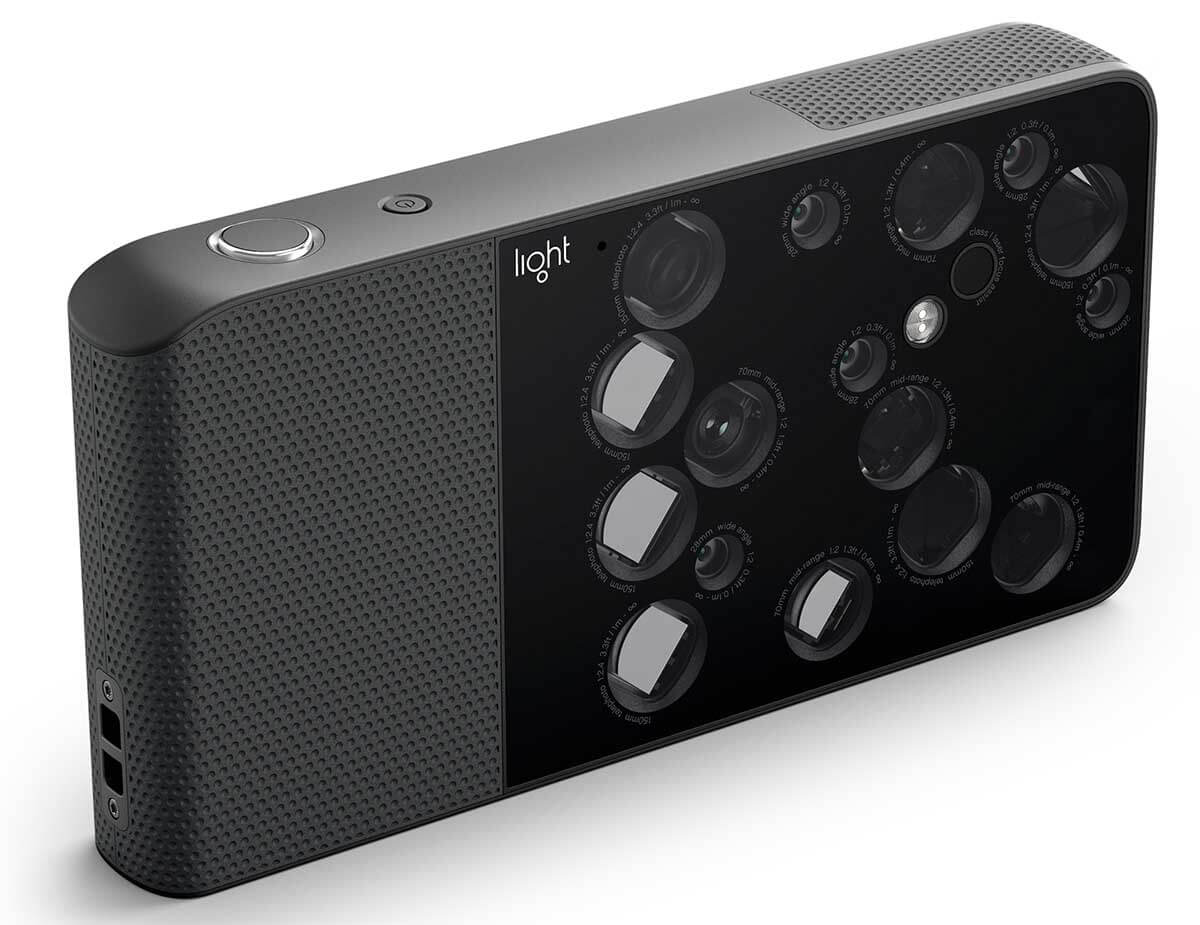 The Light L16 looks more like a slim smartphone vs. a bulky, awkwardly shaped, conventional camera with a big lens sticking out. At 15 oz it’s half the weight of the lightest comparable conventional cameras with similar resolution and lens zoom range (28mm to 150mm). It has no moving parts, which means far fewer failure modes and limited area for dust and water entry.

NOT THERE YET and CONS

AS of right now the Light L16 has the basic functionality of high resolution camera. In good light and at certain focal lengths, it takes high resolution, ~50 megapixel photos. It’s small, light and easy to use with it’s simple smartphone-like interface. There are no moving parts or items sticking out making it ideal for people on the go (like hikers , backpackers, travelers and outdoor adventurers of any ilk). Just pull it out of your pocket and take good, high resolution photos. And it offers truly new features like adjusting depth of field after you take the picture (and hopefully, in the near future, the ability to adjust focus point after you take a photo). In all, it’s an extremely attractive camera that’s half the weight and far easier to use than a conventional camera!

And to be truthful this is how I would normally take a serious photo about 80% of the time anyway.

Where the Light.c0 L16 falls short is that it lacks many of the features and nuances of conventional single lens/sensor digital cameras in the same price range.

That’s not surprising, since conventional, single-lens digital cameras have been constantly refined and improved for over 40 years (“first” digital camera was a 1975 Kodak prototype by engineer Steven Sasson). The Light L16 has only been in design/development for a few years and in production for a few months. As such, the Light L16 lacks image stabilization, good low light performance (high ISO), multi-zone exposure metering, smart focusing, exposure bracketing, remote shutter release, lens hoods, and a number of other features that are pretty much standard on conventional, high-resolution cameras for serious photography that are in the same price range. Some features like smart focusing, good low light performance, exposure bracketing, and remote control can likely be improved upon or added via software upgrades— a clear benefit of being computational. Other physical features like image stabilization, a non-replaceable battery, non-replaceable memory (e.g. SD cards), and lack of filters and lens hoods will be harder to address (altho third parties could make aftermarket solutions for some, similar to what has happened for smartphones). 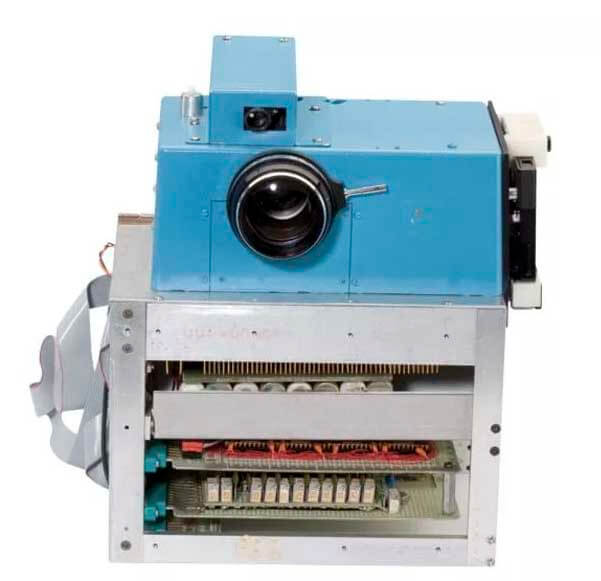 The Verdict is Still Out

As a serious hiker, backpacker, outdoor adventurer, and globetrotter who travels light and wants great photos…  I really want the Light L16 to achieve its promise! And it’s the L16’s reliance on software rather than hardware gives me hope. It seems that many of the L16’s current shortcomings and missing features can be improved upon and added over time via their “frequent” software updates. Case in point, I belive that AFTER-taking-a-photo, focus plane adjustment is coming very soon. As I write, a Light representative says “This feature will be available when we release the new version of Lumen in about 1 week.”

I wish Light all the best in quickly addressing many of these issues I and others have raised, to make the L16 the game changing camera it could be. And if it isn’t the L16 v01, it will be v02 or another computational camera. When you reflect on the improvements to conventional digital cameras over 40 years… just think of what 5 to 10 years of development and refinement of computational photography might achieve! 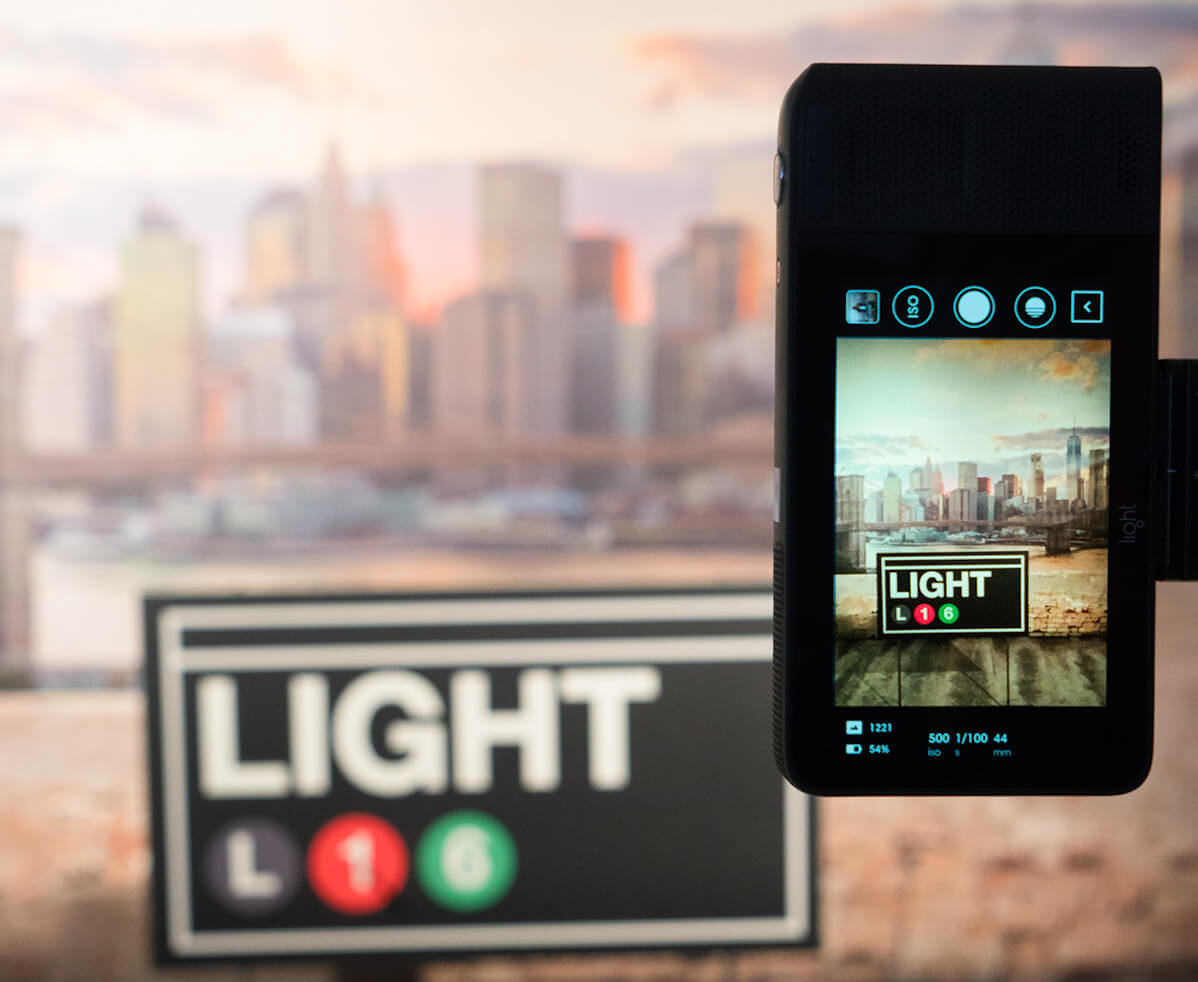