“In locations where trees are readily available—nearly all of the eastern United States plus a fair amount of the Mountain West—hammock camping is likely the best sleep system.”
Types of Backpacking Hammocks: is the second part of  this three part series. 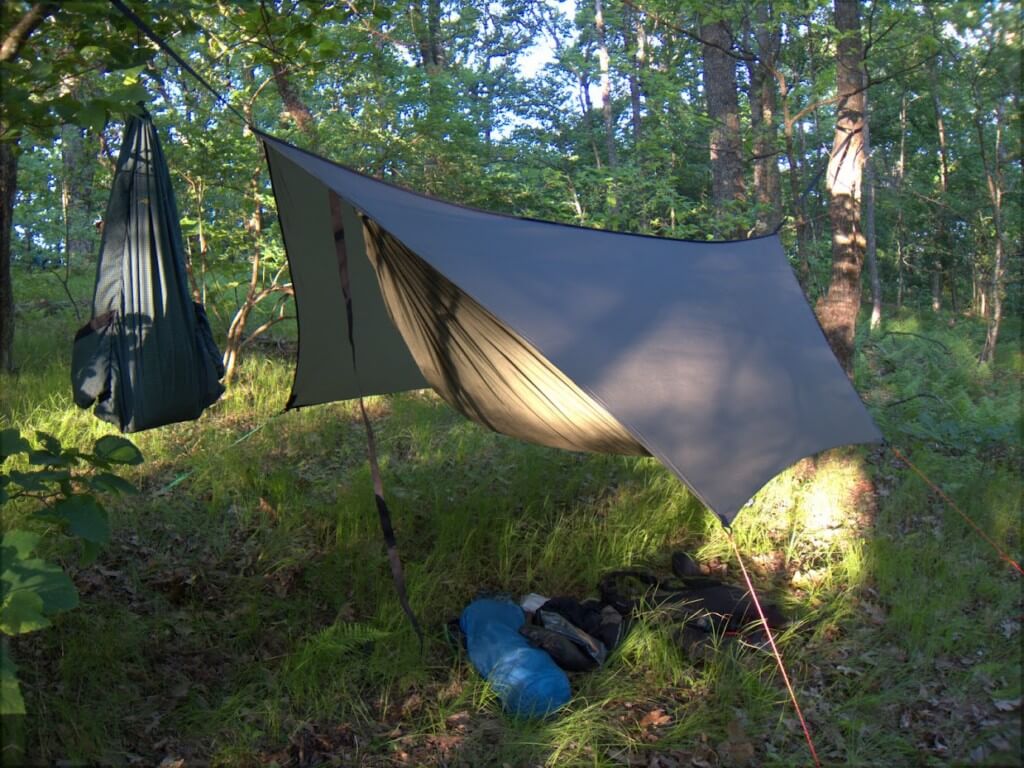 There are two main Types of backpacking hammocks on the market:

The sleeping position of both designs is relatively flat, not banana-shaped as customarily found with backyard furniture hammocks. Both designs normally feature integrated or removable no-see-um bug netting. Finally, additional components are usually needed to complete a hammock system:

This is by far the most prevalent camping hammock design. It is named for its two most distinct features:

It’s important to note that the diagonal sleeping position is enabled not just by the asymmetrical cut, but by the width of the hammock. An excessively narrow hammock, even if it is asymmetric, will not have enough material for a flat-ish sleeping position. There are two main advantages of a gathered end asymmetric hammock over the other common design, the bridge hammock (discussed below): 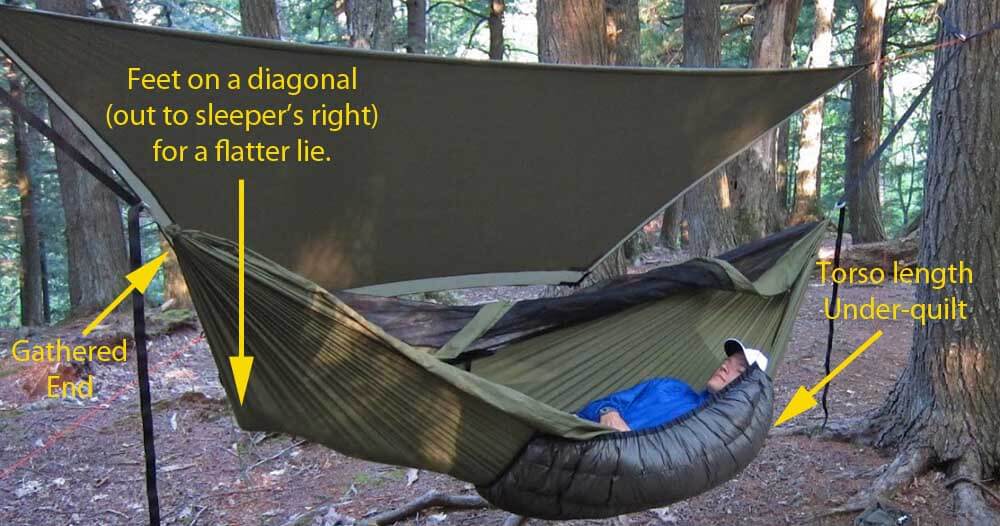 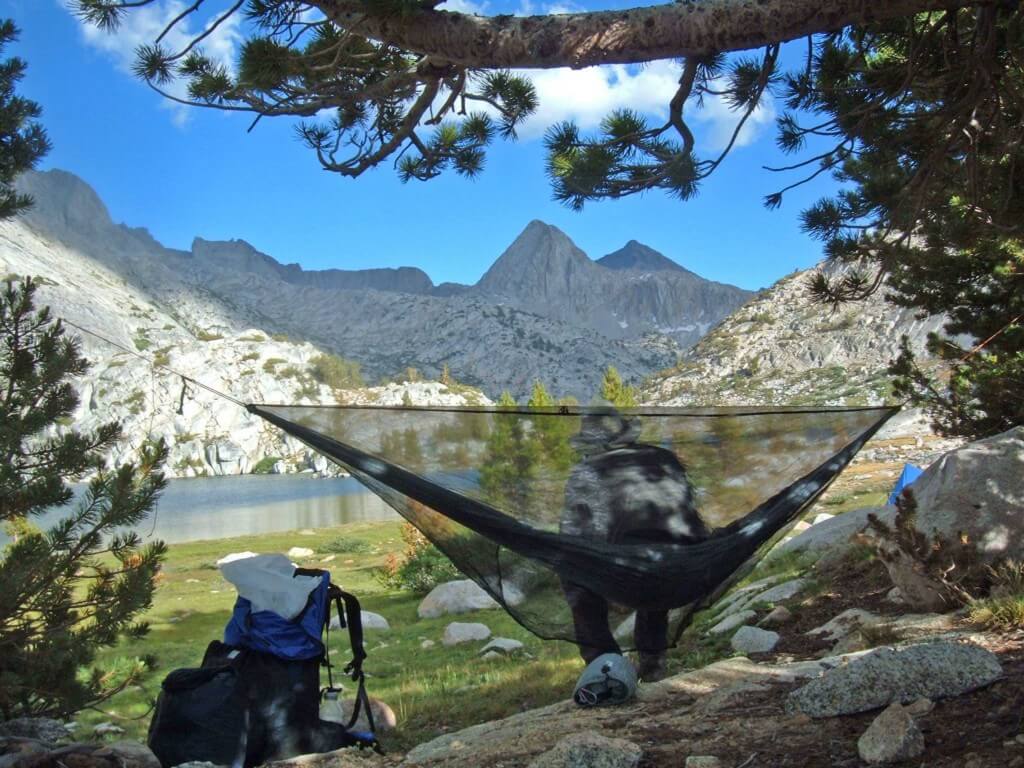 A gathered end hammock made by George “Tin Man” Andrews (self-portrait), being used as a camp chair during a thru-hike of the John Muir Trail in California. 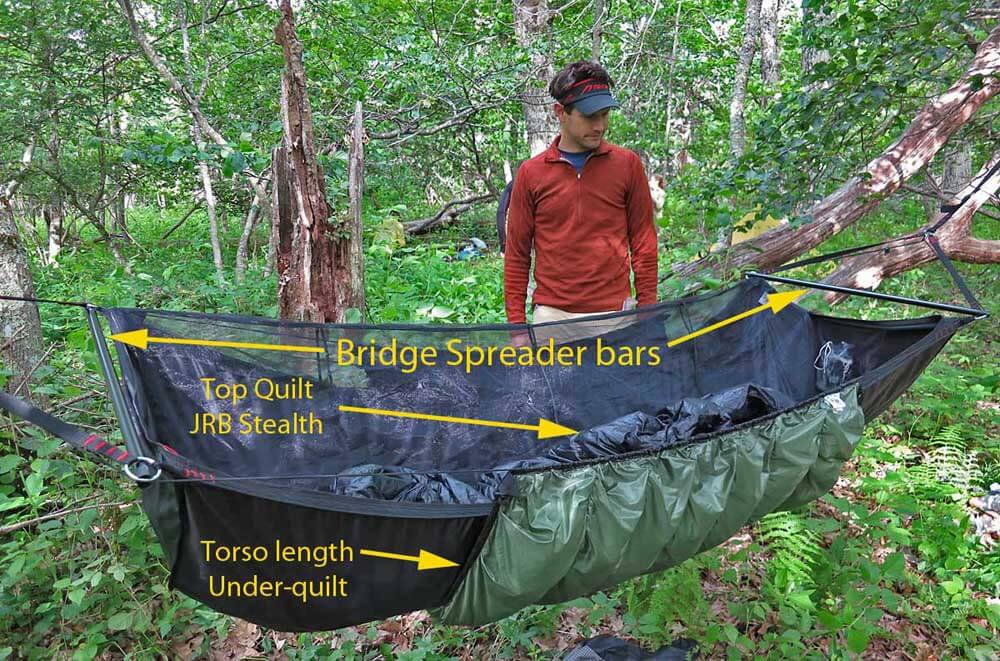 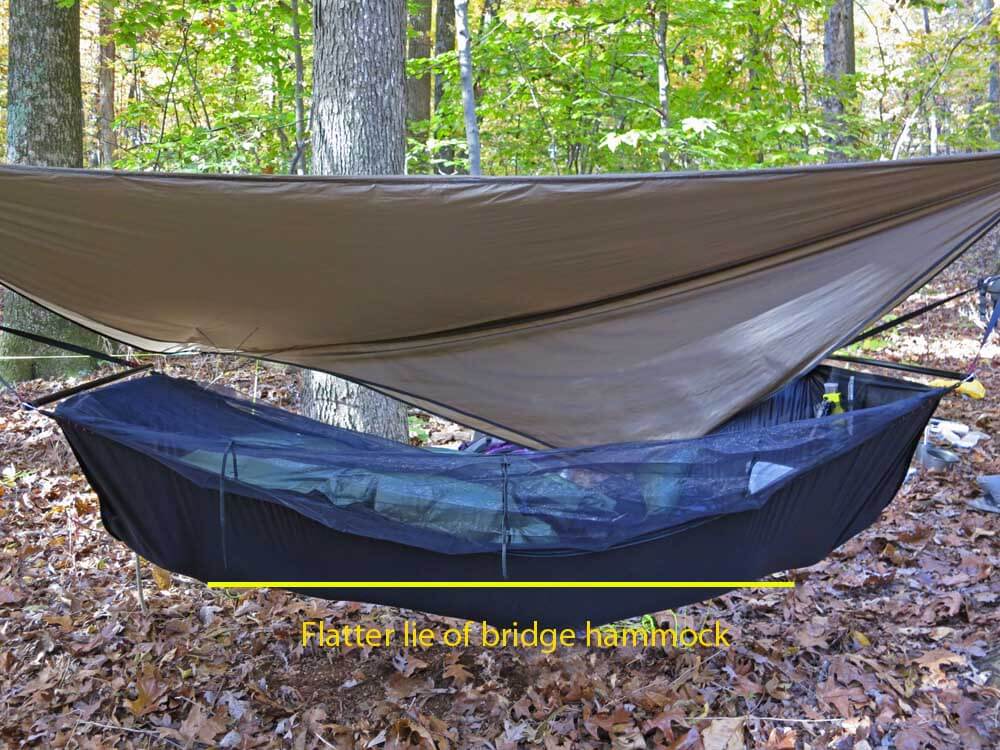 Bridge hammocks create a “flatter” lie than gathered end hammocks. Note that flatter does not mean absolutely flat. Most sleepers find it more comfortable to have their head slightly lower than their feet.

To insulate themselves against the ground, which will steal heat from a ground sleeper through conduction, ground sleepers use closed-cell foam pads or air mattresses. Hammock sleepers can also lose heat from their underside, but due to air convention, especially if there is a wind. There are two options for reducing this heat loss: 1. Use a double-layer hammock to capture and control the ground-pad. The pad is inserted between the two layers of fabric. This extra layer of fabric adds weight, but it will securely fix the ground pad in place. Double-layer hammocks are popular for this reason. 2. Use an under-quilt. A better solution is to use a hammock-specific under-quilt, which increases the warmth and comfort of a hammock. It also increases the weight and expense of a hammock system, but by no more than would a NeoAir mattresses from Therm-a-Rest, which are extraordinarily popular with ground sleepers. As an added perk, you will not get dizzy inflating an under-quilt. 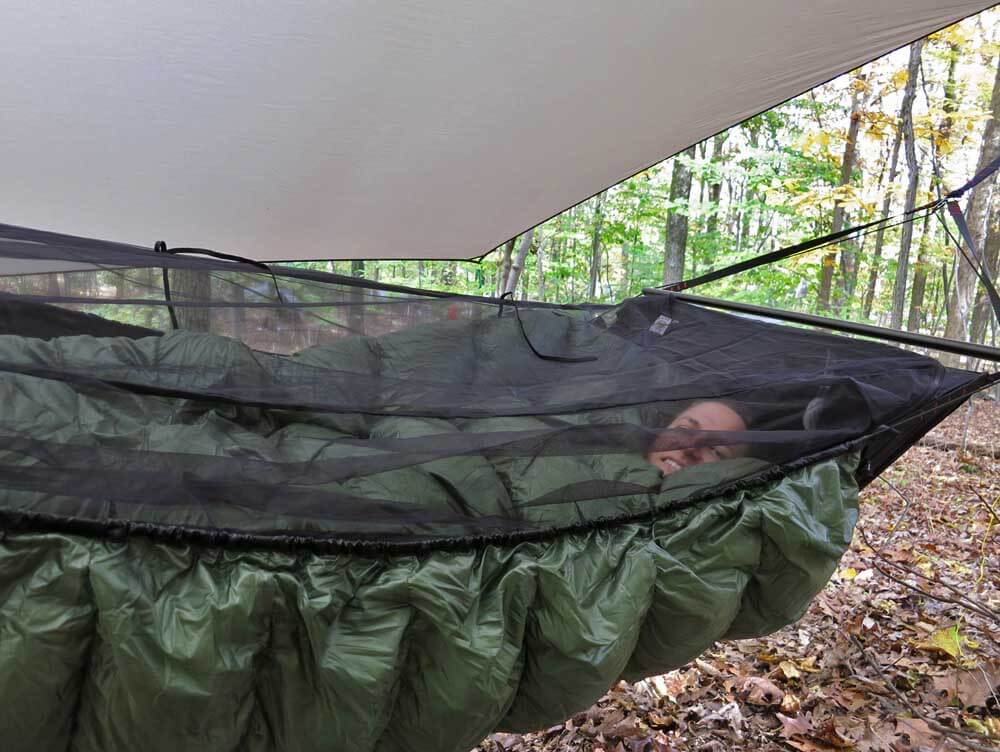 A good top and bottom quilt make all the difference for a warm night’s sleep. Pictured above is my wife, Alison, cocooned in down — a Jacks R Better High Sierra Sniveller top quilt and Greylock 3 under-quilt.

As explained in Part I of this 3-part hammock series, it’s very difficult to compare hammocks and ground systems. Each system has several popular designs and an almost infinite number of configurations; there is no “standard.” Moreover, it’d be a challenge to find two systems that offer the exact same features and user experience. Nevertheless, I have tried, below. Each system offers a standard level of protection against rain, ground water, wind, and bugs. Each system also includes underside insulation, through either an under-quilt or a sleeping pad. Topside insulation (i.e. sleeping quilt) was not included into the weight or expense of these systems because this component would not change across systems.

The conclusion you should reach is that hammock systems weigh and cost about the same as “comparable” ground systems. Other considerations—such as where you normally backpack, whether you want a one-person or multi-person shelter, if you have already invested in gear that is optimal for one system or the other, and if you are struggling to sleep well with your current system—will drive decisions about whether you are better off with a hammock or ground system.