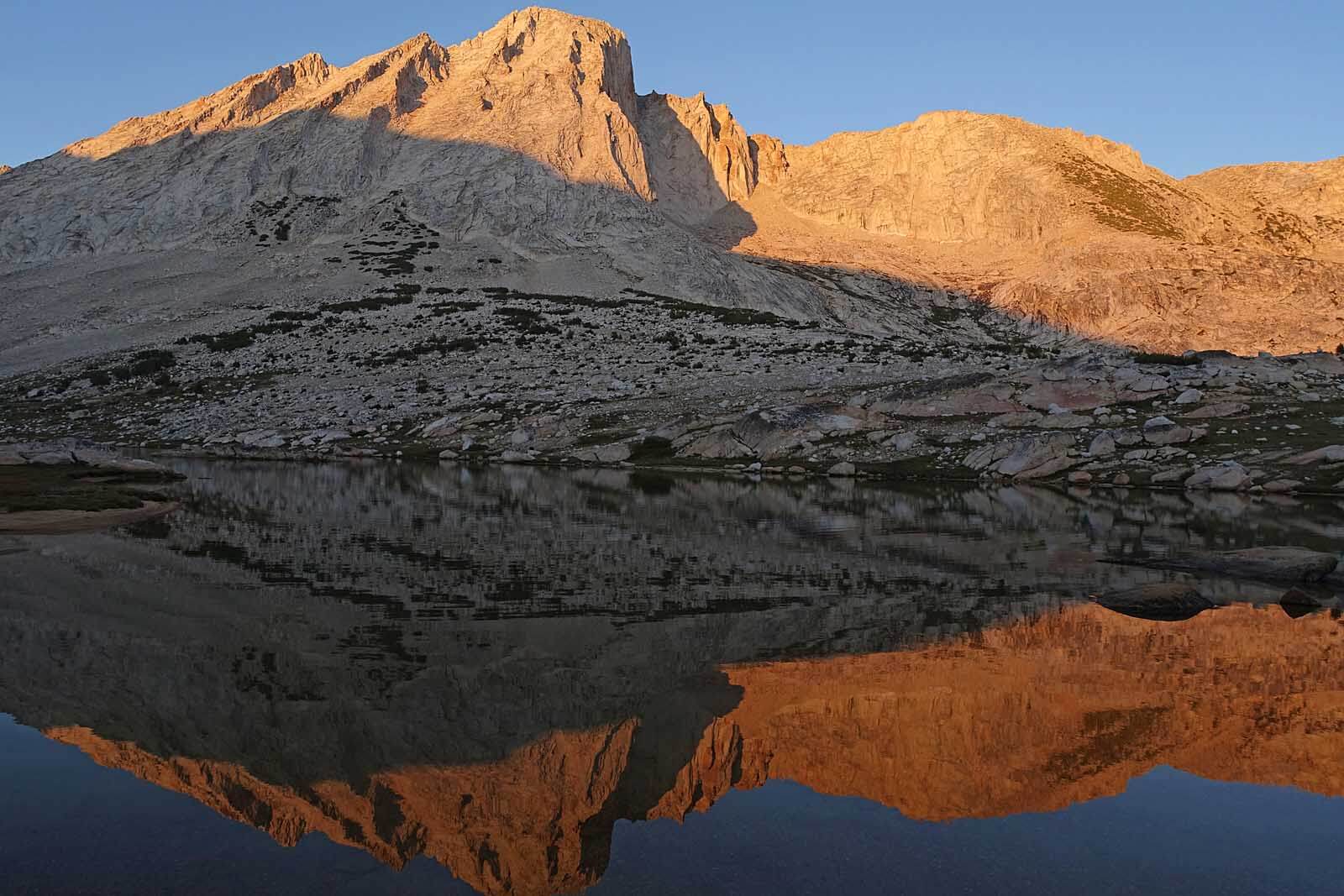 Technical Peak Climbing Yosemite Backcountry: Mt. Conness – West Ridge. The third peak of our trip and one of the finest alpine routes in the Sierra Backcountry. The route follows the obvious ridge which forms the sun/shade line.

This summer, after years of “no-rope trips” together, we switched gears to do some technical alpine climbs in the Yosemite Backcountry. We decided to do two Tuolumne alpine classics, the Southeast Buttress of Cathedral Peak and the West Ridge of Mt. Conness. Our last alpine summit was Mt. Lyell, the highest peak in Yosemite National Park (more later on the reasons for choosing Mt. Lyell).

Fun: All of these peaks are moderate technical climbs. Our goal was to not stress out—just enjoy being in the Sierras on some of the finest alpine climbing in the world!

This trip report of our climb of the Cathedral Peak’s Southeast Buttress, is the first of the series. 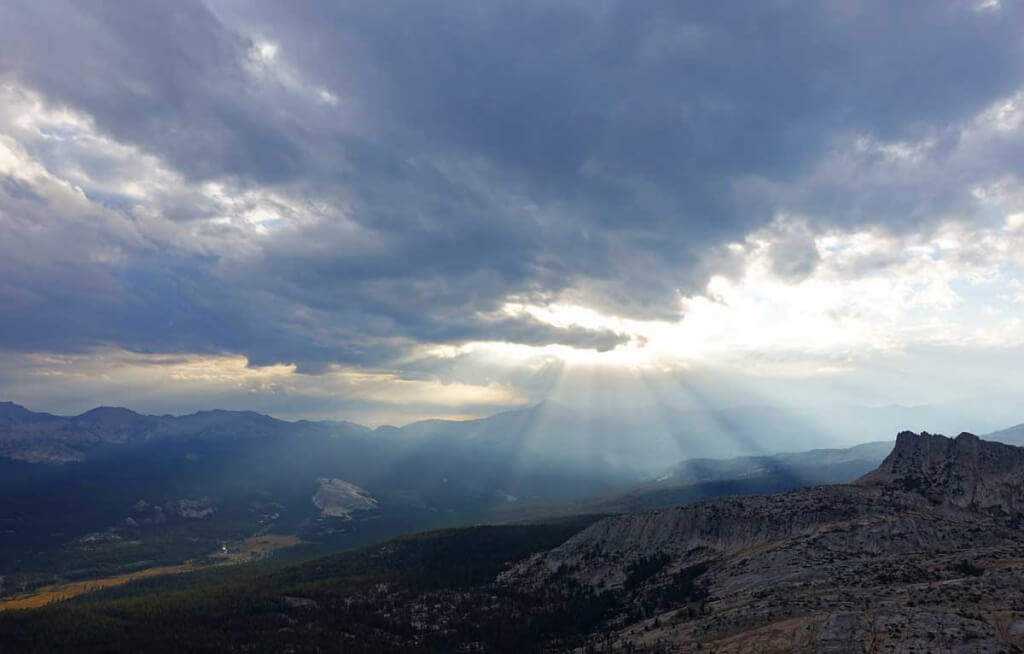 We had a simple plan for each peak 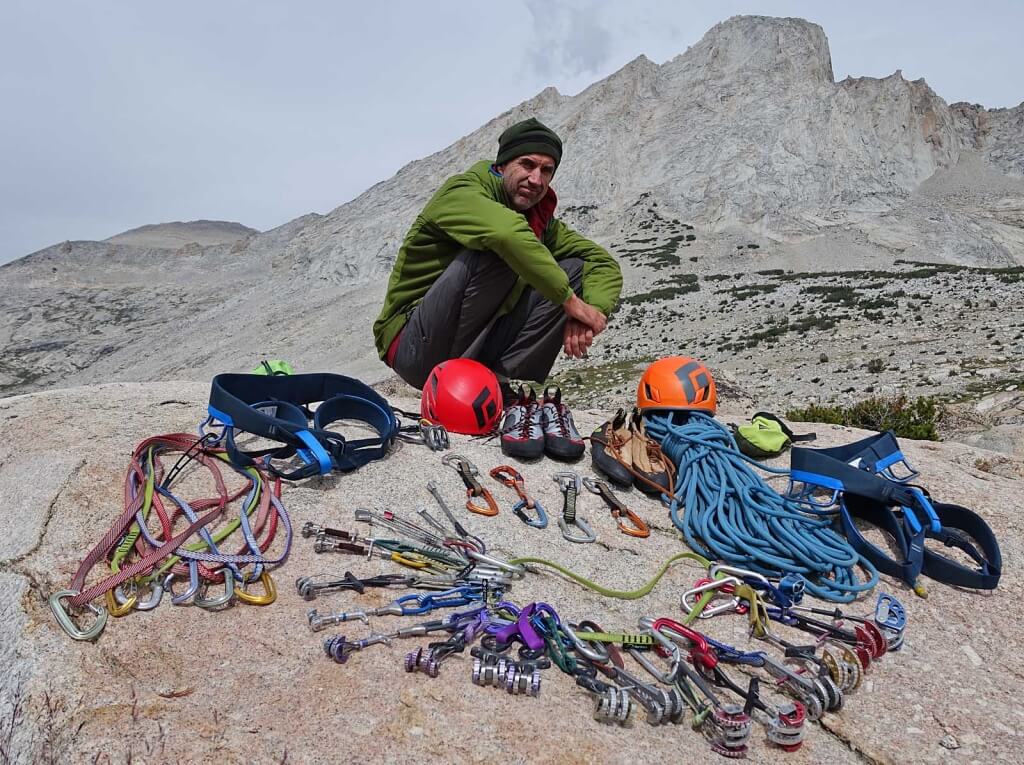 It’s good to switch it up. Do different things. Take an alternate approach. After years of traversing the Sierras without a rope, Don and I carried some hardware with us to so some technical climbing. Fun!

Jump to: Gear We Used on this Trip 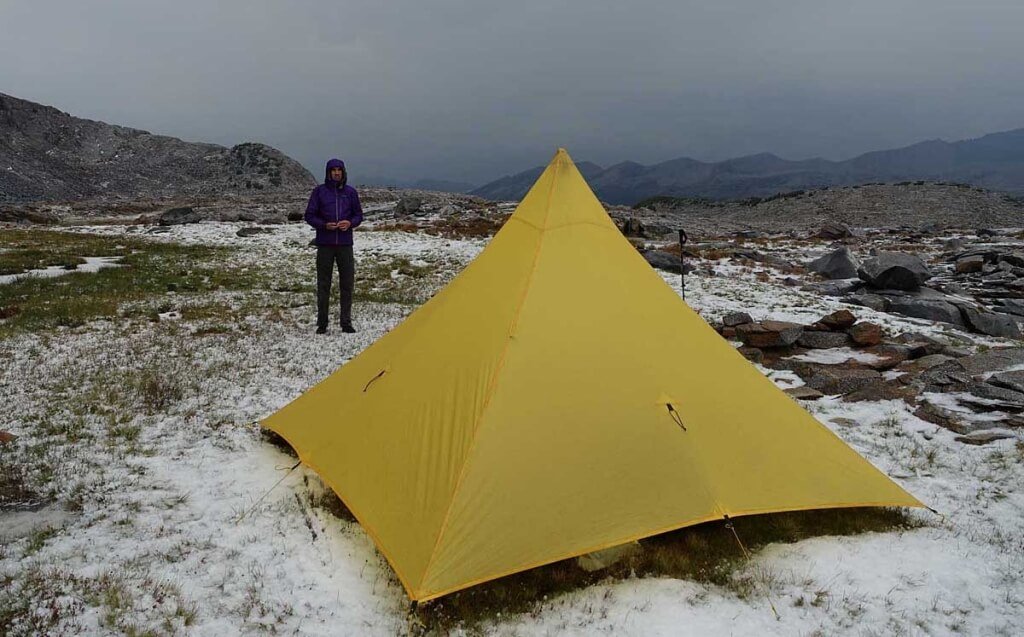 Weather was a major success factor for all our climbs. A storm could (and did) blow in anytime day or night. [Mountain Laurel Designs Supermid shelter mid-afternoon, base of Mt Lyell]

Weather was a major factor for all our climbs. The Sierras had entered into a long-term pattern of unstable and violent weather a few weeks prior to our trip. Rain was so heavy the week before that a huge landslide closed one of the major roads into Yosemite. Almost 3 weeks later, it had yet to be dug out. 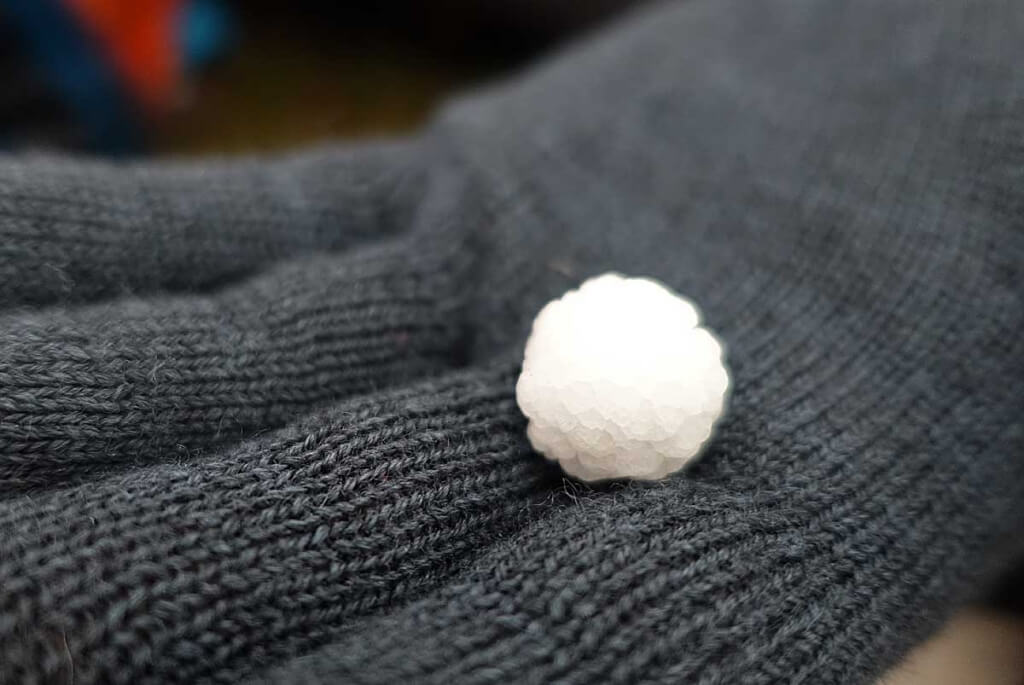 When you get hail this big pinging off your helmet you know you are in for some serious sh-t!

Jump to: Gear We Used on this Trip 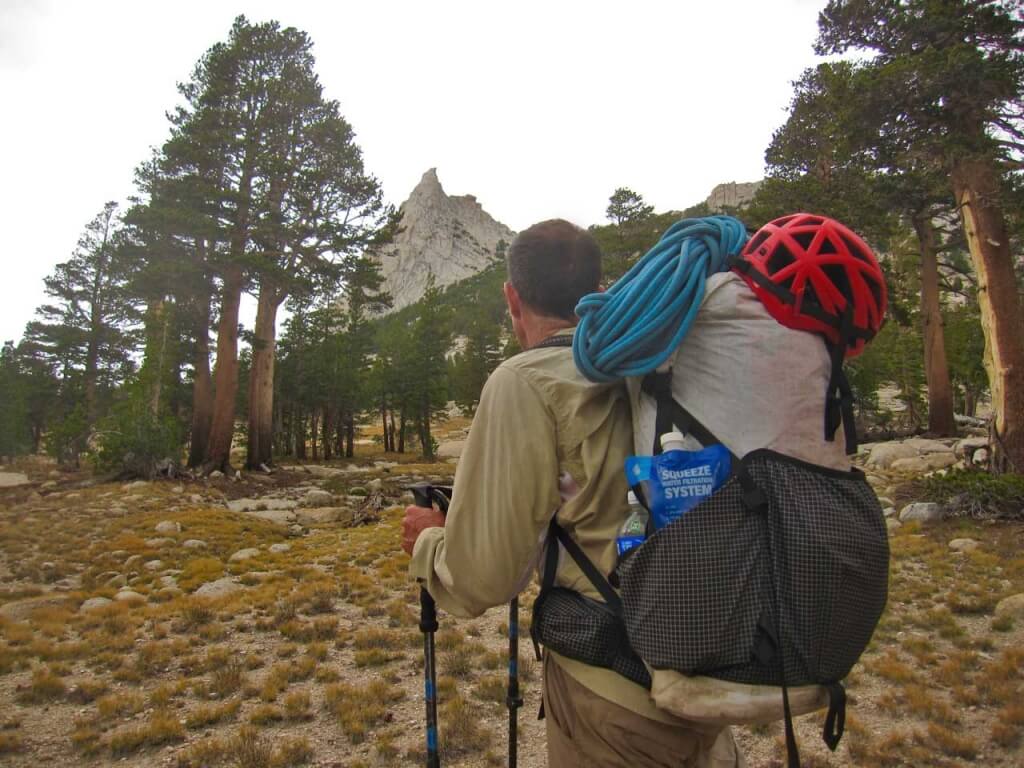 Alan on our evening approach to Cathedral Peak. Humping everything in a 28 oz Hyperlite Mountain Gear SW 2400 pack. The forecast called for strong storms starting very early the next day, so we planned to bivy at the base of the route and try to complete the route before 8 am, when storms were predicted. [Photo: Don Wilson – talusfield.net]

We already had cloudy skies and spitting rain the afternoon we hiked in to Cathedral Peak. The serious rain was supposed to start around daylight the morning of our climb. We did everything we could to get started as early as we could and summit as fast as we could. That evening we climbed the first pitch before dark and fixed a rope. 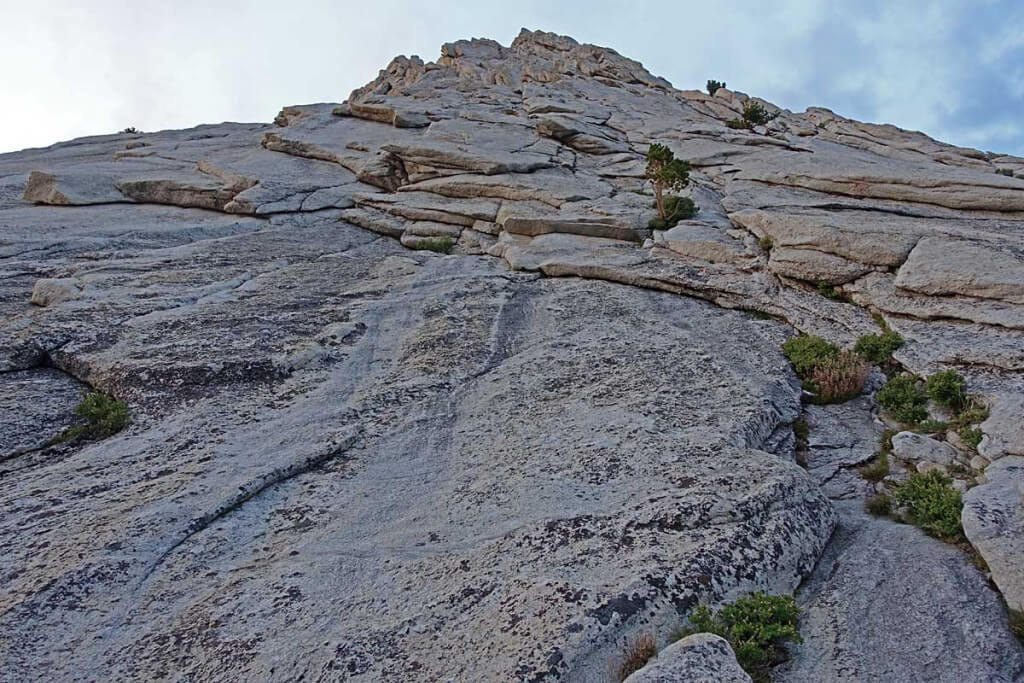 A look up at the bottom face of Cathedral Peak. That evening we climbed the first pitch before dark and fixed a rope to make a faster start the next morning.

We settled into our bivy sacks a bit after dark. We slept fitfully worrying about the weather. During the night the sky continued to get darker and more threatening. About 4am raindrops on our face woke us—a light rain shower passing over. We looked at each other and said “Screw this! lets get go climb.” It only took us about 10 minutes to suit up, pack up, and hang our backpacks in the trees away from marmots (no food in our packs!). 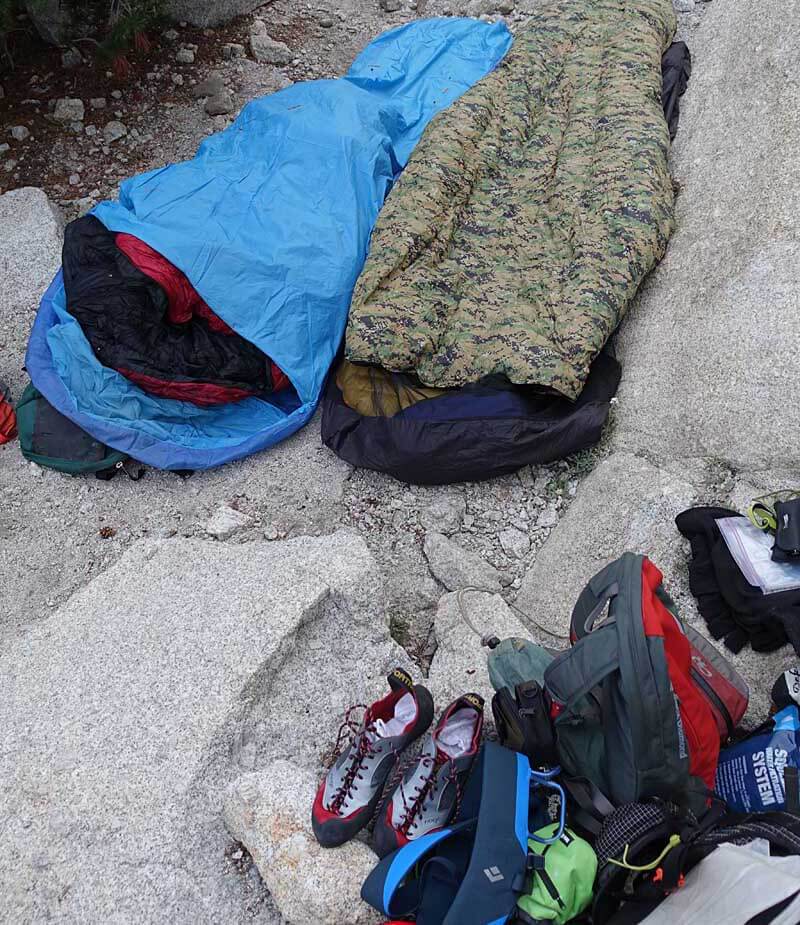 Little room on a ledge below the climb. Getting ready for a cramped and rocky bivy. All our gear is laid out to put on in the dark. We both used MLD Superlight Bivy sacks, I used a Hammock Gear Burrow +30 Quilt. And we both shared a MLD Grace Duo Tarp in Cuben Fiber in case of overnight rain.

We were grateful for a fast start after fixing the first pitch the evening before. We quickly hit a rhythm, and climbing in the dark under headlamps knocked off the first 2 pitches before light began to seep through the clouds. As stated above, the Southeast Buttress of Cathedral Peak is an incredibly classic line.  Perfect rock, good protection, moderate 5.6-5.7 climbing, face, cracks, chimneys – it’s got it all. 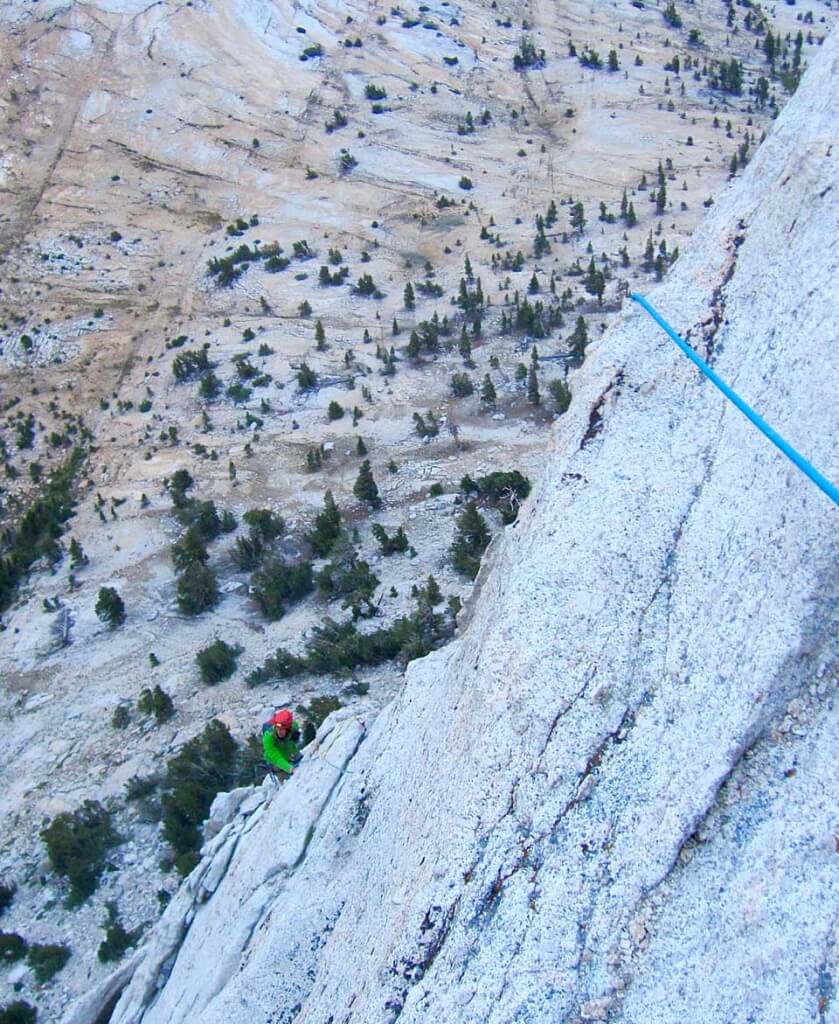 Alan following the 4th pitch after exiting a short chimney and getting onto the beautiful upper part of the buttress. The weather looked dicey, so we moved as quickly as we could. [Photo: Don Wilson – talusfield.net] 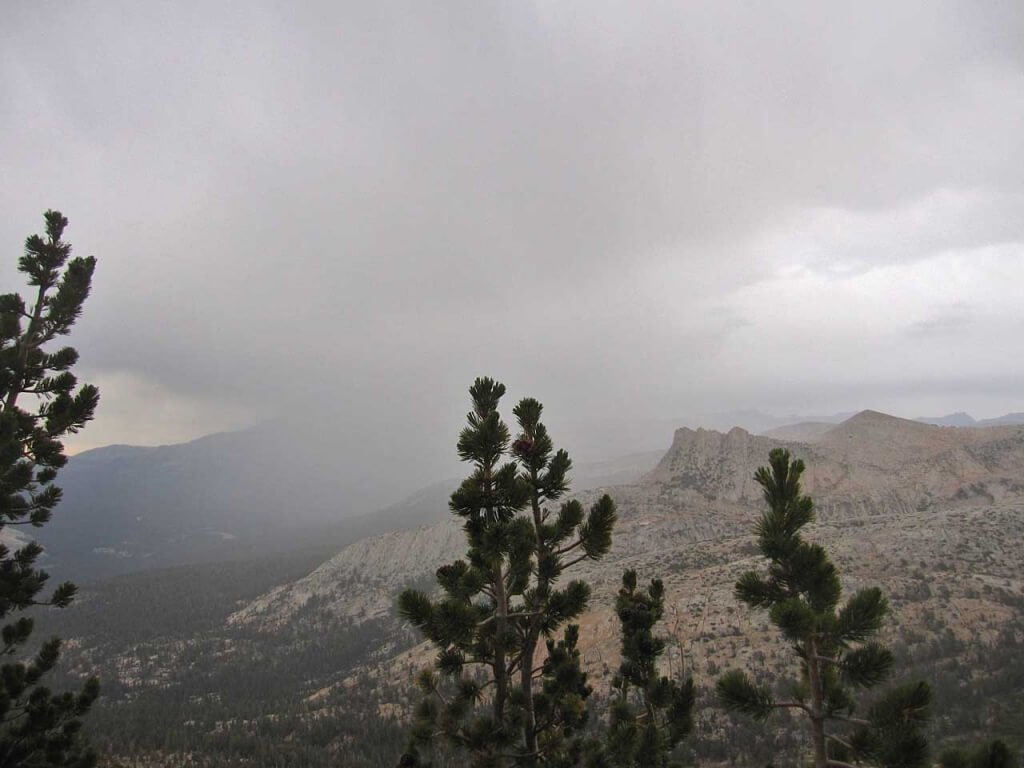 Alan celebrates arrival on the exposed summit ridge. Photo taken from atop the summit block. We reached the summit soon after 7 am. [Photo: Don Wilson – talusfield.net] 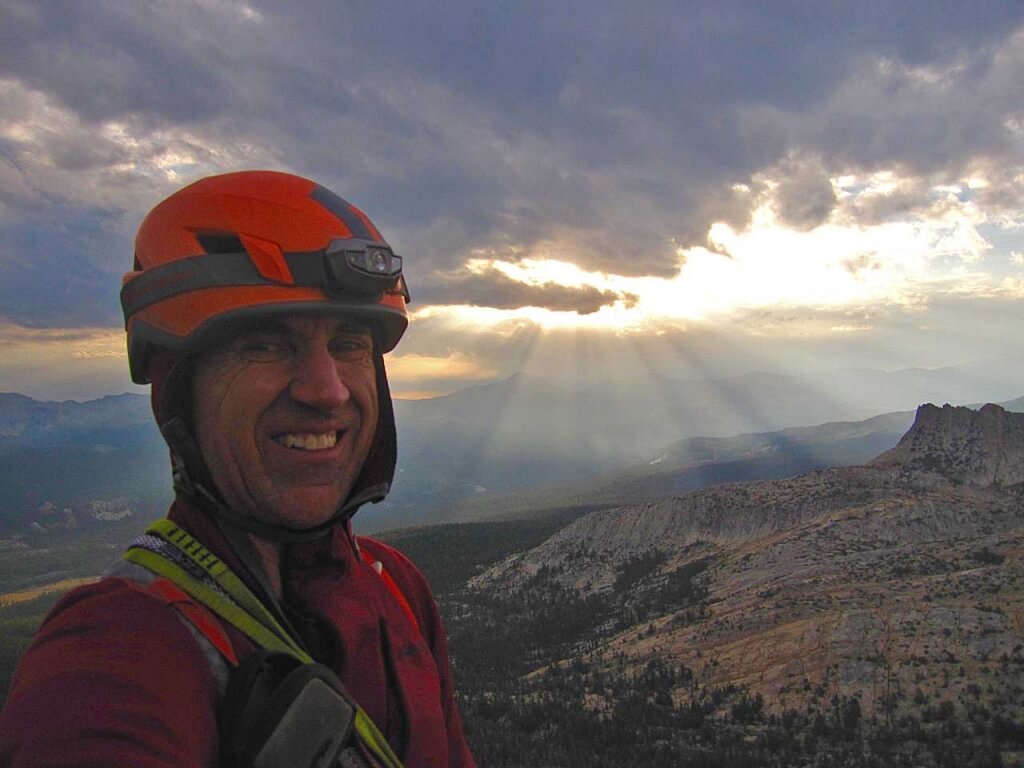 Mission accomplished: We had a crap-load of fun on a beautiful climb! [Photo: Don Wilson – talusfield.net]

As with many alpine climbs, an early start paid off. It started to rain as we descended off the peak. At the base of the climb we met another party sheltered under some pines. That had humped all their stuff in early in the morning. And unfortunately, they were getting ready to hump it all back out without climbing. 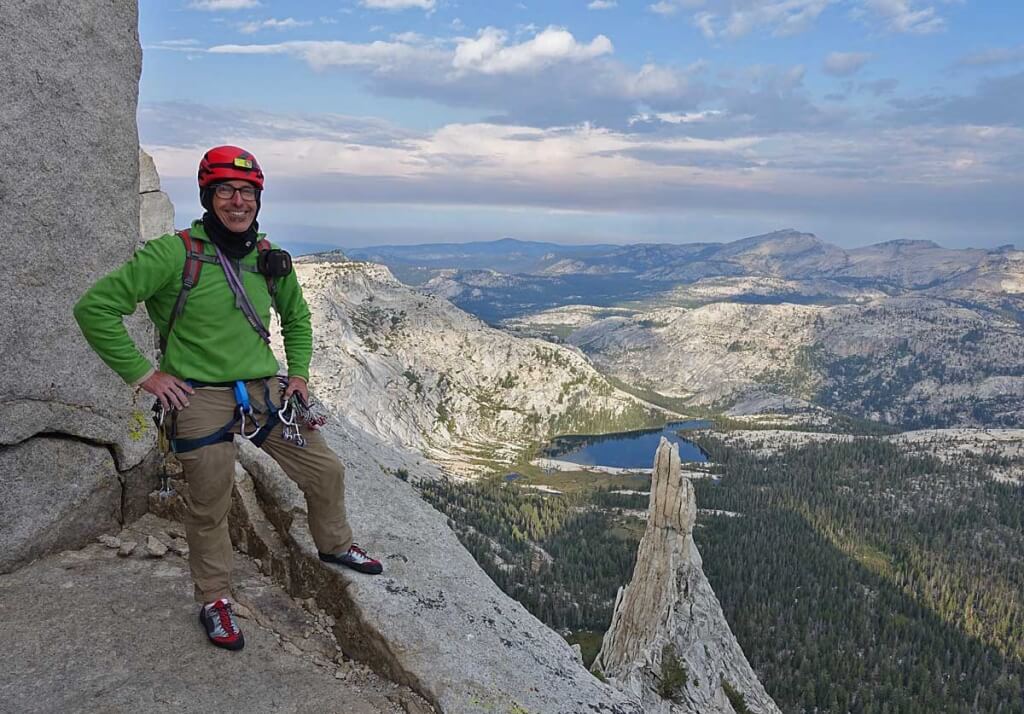 Alan just below the summit at the beginning of the descent. Gorgeous Eichorn Pinnacle and Lower Cathedral Lake in the background. As we descended, the storm enveloped the peak.  We met a couple of other climbers huddled at the base, defeated by the weather. Chalk one up for an early start. We packed up and headed back to the campground for eggs and muffins and best of all, hot coffee.

Select gear variations for this trip