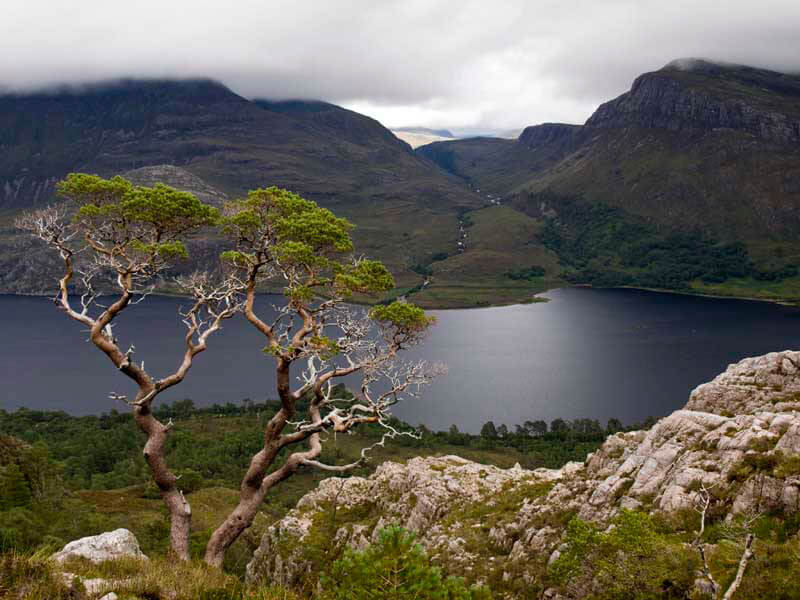 A sudden opening in the clouds illuminates a lone tree and a small outcrop overlooking Loch Marie in Wester Ross. The summit of Slioch (left) is still shrouded in mist at midday. [Handheld with 16 oz, mirrorless digital SLR camera (like this) with its stock zoom lens. ] This photo looks great enlarged to 14×19.

Purpose: This article addresses the selection of a lightweight backpacking camera and photo gear. In particular, you will understand the tradeoffs of camera size and weight vs. image quality. 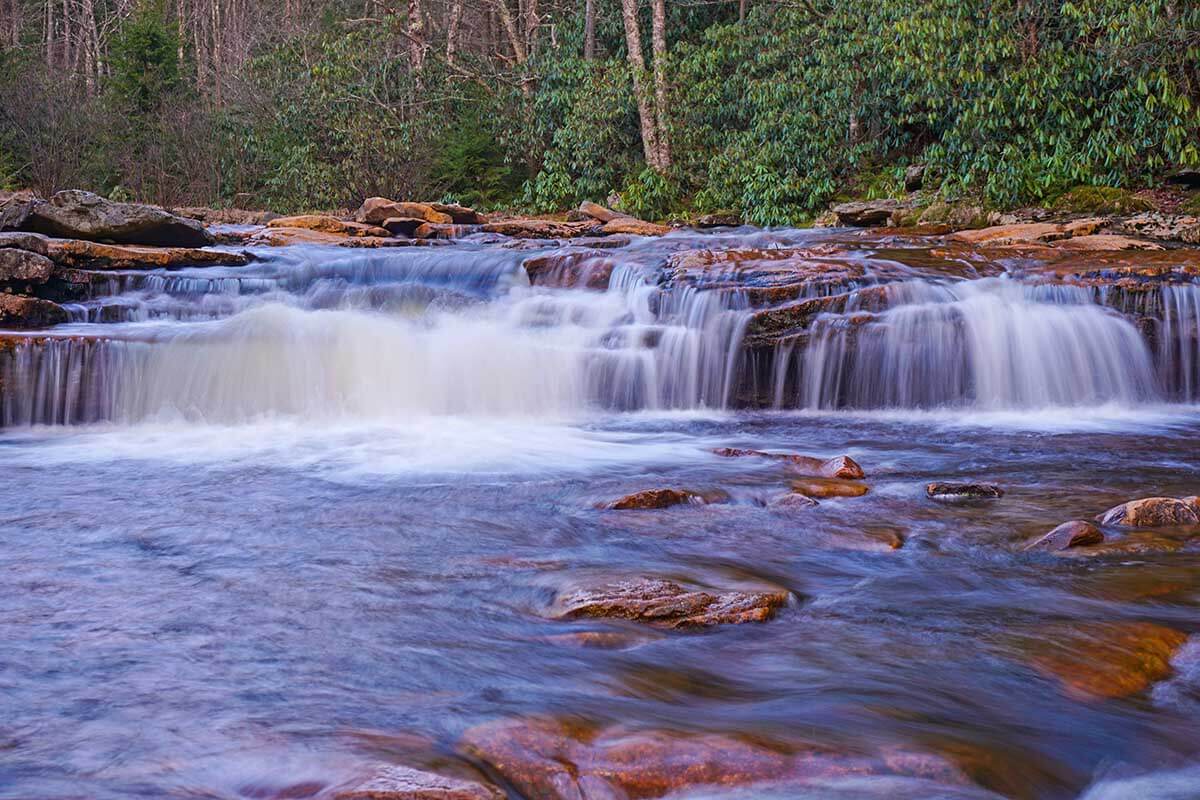 A recent photo shot in Dolly Sods Wildness with the 16 oz Sony a6000 mirrorless digital SLR camera and its stock zoom lens (listed in table above).

If you don’t want to go into all the gory details at this point you can just jump to a discussion of the Lightweight backpacking cameras I use.

My three lightweight backpacking cameras L to R: Canon PowerShot S100 (current model s120), Sony a6000 w kit 16-50mm lens (new model: Sony a6300), Sony RX100iii (current model RX100iv). With each increase in size, weight and cost you get higher quality images, but at expense pocket-ability and rapid access to the camera for a quick shot. (photo taken with my iPhone 6+)

While some point and shoot lightweight backpacking cameras may produce quite serviceable photos, don’t expect professional quality images from a camera with a sensor* the size of your little fingernail and a lens the size of a snap pea. It would be great if a 5 oz Point and Shoot (P/S) compact camera produced images close to the quality of images from a 3 ½ pound digital SLR (DSLR) camera and lens combination like a Canon 5D and 24-105mm f/4L IS lens. But camera sensor and lens size has significant impact on image quality. In summary: better image quality requires a larger sensor, which in turn requires a larger camera body and a larger lens, and ultimately a heavier camera.

Since we can’t bypass laws of physics (sensor* and lens size), each backcountry photographer will need to find a satisfactory compromise between camera size/weight and image quality.

* Sensor is the device in a digital camera that electronically captures the image. It performs the same function as film in old style film cameras. 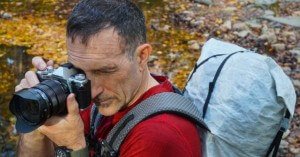 Also see 5 Most Important Features for a Backpacking Camera

Alert! as a backpacker you are not well served by mainstream camera reviews like DPReview. That is, the 5 Most Important Features for a Backpacking Camera are quite different than those for a general use camera in mainstream reviews. Hear are the major differences.

Finally, there are no takeovers for backpacking photography. A small sensor P/S camera is extremely unlikely to produce a high quality enlargement no matter how fabulous the shot. Photoshopping is unlikely to make significant improvements. Think hard before you commit to a smaller sensor camera. 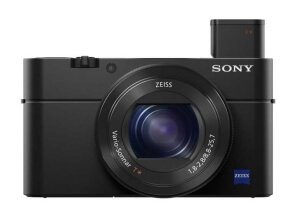 The Sony is  in a class to itself for image quality for a light & compact camera.

You best option for serious backpacking photography is probably one of the inexpensive mirrorless crop format camera (APS, APC, μ4/3) like current Sony a6000. The best of these cameras approach full-format SLR picture quality in a light, compact camera with interchangeable lenses. By doing away with a SLR mirror and viewfinder, but retaining the larger sensor and lenses of an SLR, you significantly reduce weight and bulk but retain picture quality. The 16 ounce Sony a6000 with the right $200 prime lens (Sigma 30mm f2.8 DN), can produce image quality challenging the Canon 5D.

And I admit, even I am tempted from time to time to carry a Canon 5D into the backcountry for its superb resolution and image quality! Note: The full-format mirrorless Sony a7 is starting to make inroads into the serious professional photo market. Even here photographers are finally getting tired of the weight and bulk DSLRs. 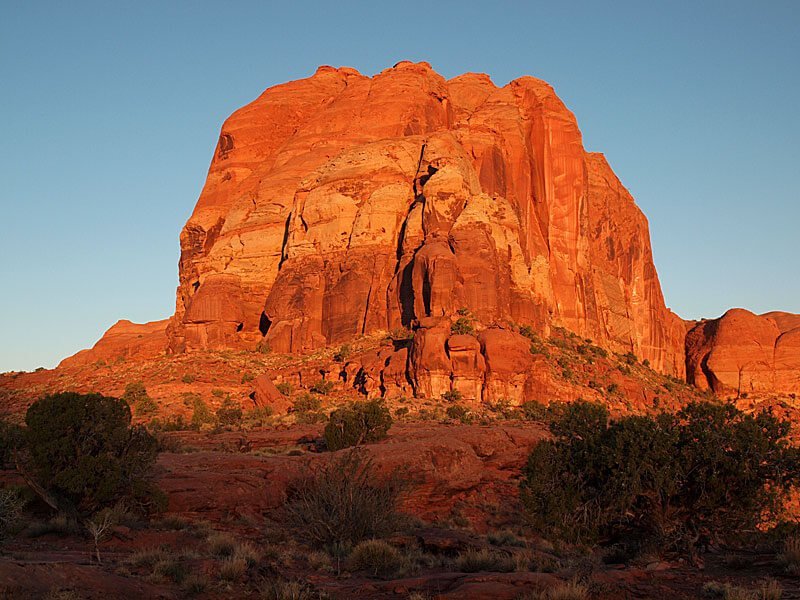 Sunrise Escalante River, Olympus E-30 and stock 14-42mm f/3.5-5.6 Zuiko ED Zoom lens. This photo looks great enlarged to 14×19. I just got done looking at the pictures my friend took with a compact P/S camera vs. the pictures I took a few weeks earlier in the same area with an Olympus DSLR with a 4/3 sensor (about nine times larger sensor). The P/S pictures are ”muddier“ and not nearly as sharp. The colors are muted and there is less tonal range. There are lots of pictures with detailess dark shadows or white (not blue) sky, sometimes both in the same shot. True, my friend still has a nice (and serviceable) photo record of her trip but most of these photos are not technically worthy of an 8×10 enlargement. Some of the shots, if they were taken with a better camera would make excellent enlargements worthy of framing. Bottom line—larger camera, larger sensor, better picture.

Cameras and Their Sensor Sizes

The following is a list of some cameras and their sensor sizes.
As a rough estimate, the lower the pixel density (mp/cm2) the higher the image quality of the camera. 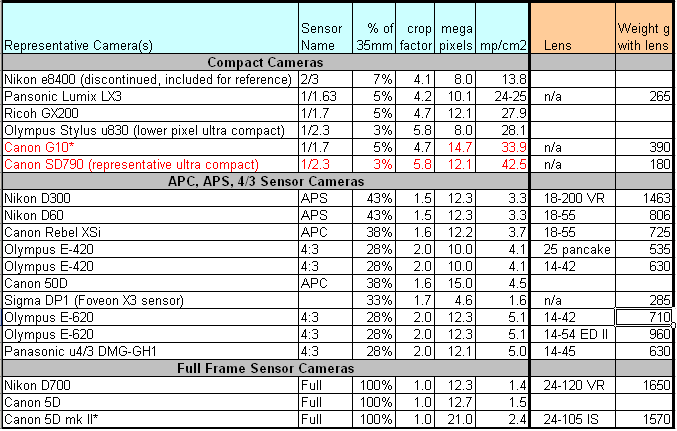 Note: the example cameras in this are a bit dated, but the message is still good. Altho, now over 5 years later sensor technology has improved to the point where a current crop sensor camera like the Sony a6000 out-performs a 5-year-old, full-format DSLR.

Pixel density counts, but there may still be significant image quality differences between cameras with sensors of similar pixel densities (although probably not enough to jump camera classes). These differences in image quality are usually due to improved sensor technology and improved camera image processing. E.g.:

Available Lenses: Their Quality and Their Weight

Larger sensors require larger lenses. Larger lenses are heavier, and significantly more expensive to make. In particular it is quite difficult to make an inexpensive, high quality full frame (35mm) lens for cameras like the Canon 5D. This is where the smaller, high quality midsized sensor lenses like the Olympus Zuiko μ4/3 format lenses really shine. For the Sony a6000 there are some incredible deals with Sigma’s Art Series prime lenses. So make sure you check out the availability of high quality lightweight lenses before committing to a particular camera line. Sometimes, the lenses are significantly more important for weight and image quality than the camera body. And it is likely that you will own and use the lenses far longer than a given camera body.